Hard to find spot for Holland

West Ham United under-23’s continued their impressive start to the season against Middlesbrough on Friday.

The Hammers’ academy side remained unbeaten in all competitions as they edged a seven-goal thriller in the North, picking up all three points with a 4-3 victory.

Manuel Pellegrini will have his work cut out with the number of impressive youngsters making a statement in those games, with the likes of Conor Coventry continuing to dominate opposition sides.

Exciting winger, Nathan Holland, scored once again in the game, cutting inside from out wide and firing a shot into the bottom corner in the opening quarter of the match.

Many Hammers’ fans were in awe of the starlet after the game on Friday, with some even calling for the 21-year-old to make the step up into the Premier League.

Even though Holland is in red-hot form in the Hammers’ academy after already being involved in three goals this season, it would be difficult for Pellegrini to find a spot for the youngster, who would surely just sit on the bench if called upon.

Claret and Hugh did report in the transfer window that the Chilean did block a loan-exit for the English flyer, but he must be scratching his head trying to find a solution as he continues to excel.

With players such as Manuel Lanzini and Felipe Anderson starting the season in fine form and having options like Pablo Fornals and Robert Snodgrass on the bench, chances will be limited.

Looking at the South American pairing and their starts to the season via WhoScored, it is clear to see that Holland would be out of his depth in the first team. 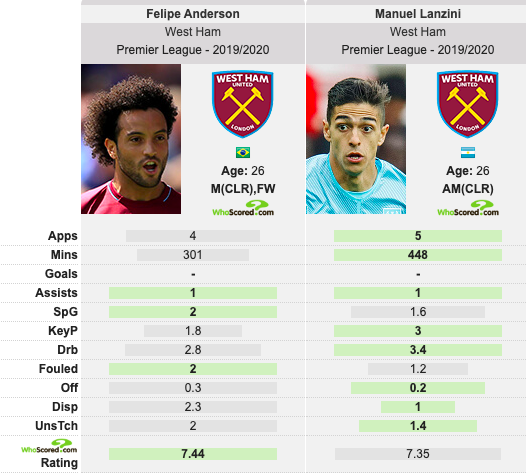 Anderson has continued his form from his first Premier League campaign last season, averaging two shots per game as well as 1.8 key passes – proving he can always create opportunities for goals whether for himself or his teammates.

Lanzini is in the same bracket, and is more creative in the final third, completing 3.4 dribbles and three key passes in each outing. Those stats show that the Hammers aren’t exactly lacking options in attack and that Holland isn’t exactly required.

Holland and West Ham fans are surely set for disappointment regarding his first-team opportunities at this moment, as he is simply facing an uphill battle to break into the first-team squad and until other players start to disappoint, there looks to be no opening for him.