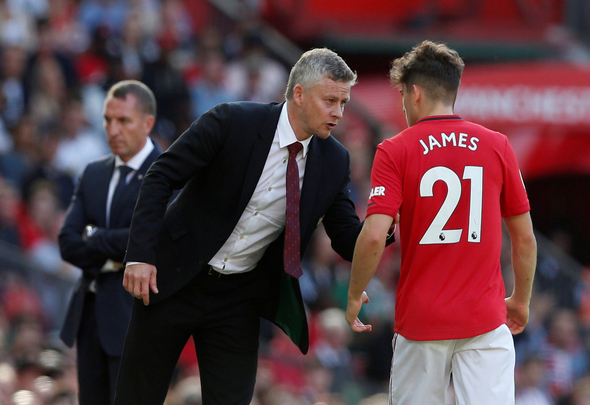 It seems West Ham will need a trick up their sleeve to stop Manchester United attacker Daniel James causing them problems on Sunday as he reportedly could feature against the Hammers.

Manuel Pellegrini’s side are set to face Man United on Sunday and despite reliable journalist Samuel Luckhurst previously stating on Twitter that the Welsh winger had missed training on Wednesday, he may be fit enough to feature.

The Metro reported on Saturday that James could return to action for Man United despite picking up an injury in the 1-0 win over Leicester City on Saturday, which caused him to miss the clash with Astana.

The football outlet stated that James had definitely made the trip to London with Man United’s squad ahead of the clash against West Ham, and given his talent, Manuel Pellegrini needs to ensure his side have a plan to stop the winger if he is deployed.

The 21-year-old has scored three league goals in four league outings, averaged an impressive 2.6 shots per game and has averaged o.4 dribbles per match. (Source: WhoScored)

James has clearly proven to be a handful for any side he has faced this season in a Manchester United shirt as he has been fouled 2.6 times per match and that shows how his opponents can’t contain him.

Also given that the Man United dazzler had to frustratingly sit out his side’s Europa League clash, then he’ll likely be chomping at the bit to prove his worth if unleashed on Sunday.

West Ham are looking to build on their 10th-place finish in the 2018/19 season and considering that Manchester United finished sixth last season, beating them would show that Manuel Pellegrini’s side mean business.

The Hammers have looked more defensively sound as of late, they kept a clean sheet despite going down to 10-men against Aston Villa on Monday, but Manchester City showed that Pellegrini’s team could be carved open with the right players considering they beat them 5-0.