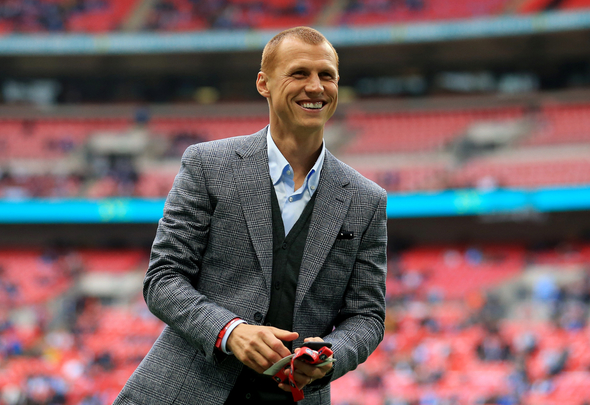 Steve Sidwell insisted that he thought West Ham would be fine this season but shared he was predicting Brighton to beat them on Saturday.

Brighton host the Hammers on Saturday and Sidwell claimed he fancied Graham Potter’s side to get all three points after their 3-0 win over Watford, and predicted the game to be an exciting clash.

“After their magnificent away win at the opening day at Watford, I’m going to go for Brighton at home to West Ham,” said Sidwell on Liquid Football (51:15, available on Apple Podcasts).

“It’ll be an exciting game, first home game of the season for Brighton, got that new style of play that they’re doing, so I fancy them at home.”

Kelly Cates then questioned whether Sidwell should be cautious about going against West Ham on the basis of their 5-0 loss to Manchester City, and he responded by insisting the Hammers would be fine this season, but he just fancied Brighton to win.

“No listen, I think West Ham will be fine this year,” clarified Sidwell.

“What they’ve done in the last few transfer windows…the owners have backed them and I think they will be fine.

Sidwell made sure to let everyone know that he was still confident about West Ham and wasn’t just predicting a loss for them due to their heavy defeat against Manchester City at the weekend. When you consider that Brighton did surprise everyone by beating Watford 3-0 on Saturday, after all the Hornets did impress last season by reaching the FA Cup final, it’s easy to see why he fancies the Seagulls to win. Also, it is worth taking into account that Sidwell previously played for Brighton, so no doubt likes to predict a win for them whenever he can. However, it’s up to the Hammers to prove Sidwell wrong and up their performance from the clash with Man City. Manuel Pellegrini’s side never really got going in their clash with the champions, they managed to have only three shots (Source: BBC), and it’s clear they’re capable of more. After all, summer signing Pablo Fornals didn’t even play the full 90 minutes of the match with Man City, and big things of the playmaker are expected. The 23-year-old averaged 1.7 shots per goal for Villareal in the league last season, scoring twice and assisting three goals, as per WhoScored, so surely he can make more of a difference for the Hammers against a side like Brighton.