West Ham could come up against Maupay next weekend 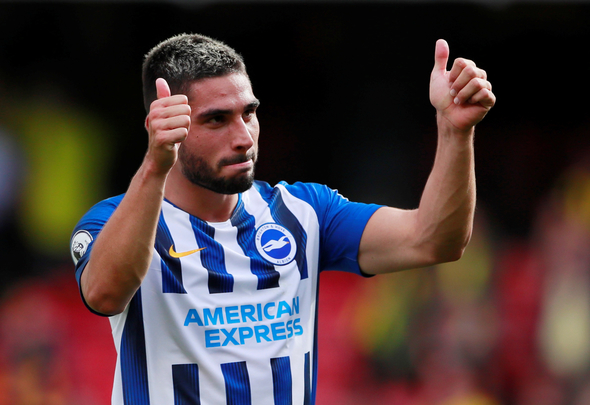 West Ham missing out in the reported race to sign Neal Maupay from Brentford in the summer may return to haunt them on Saturday when they clash with Brighton.

Sky Sports previously reported during the transfer window that the Hammers were one of the teams, alongside Brighton, Aston Villa and Sheffield United that had expressed an interested in the 22-year-old.

Football Insider even went as far as to report that the Hammers were ready to make a big offer for Maupay to get him off Brentford, but it seemed nothing came of West Ham’s interest.

Instead, Maupay ended up leaving Brentford to join Graham Potter’s side.

The 22-year-old centre-forward would have been a welcomed arrival at the London Stadium if Manuel Pellegrini’s side had signed him, as he ticked a lot of boxes.

Maupay proved to be prolific in the Championship last season with Brentford as he scored 25 goals while registering eight assists, in 43 league outings for them.

The attacker also had a decent pass success rate of 77.1% in those outings and showed that he had a tendency to be a constant thorn in his opponents’ side as he was relentless in front of goal, shown by the fact he averaged 3.3 shots per game. (Source: WhoScored)

Yet the Hammers now have to be aware that Maupay is capable of causing them issues on Saturday.

The 22-year-old may get the nod to feature for Brighton against the Hammers this weekend, after all in his Premier League debut against Watford he impressed.

Potter brought Maupay on as a substitute for the final 26 minutes, as per Transfermarket, of his side’s clash with Watford and he made an instant splash by scoring, and given that it was his only shot of the game then it shows how clinical he is potentially set to be in England’s top-flight. (Source: Premier League)

So with that in mind, missing out on Maupay’s services this summer may return to haunt the Hammers on Saturday as you can’t rule out him helping Brighton to a good result.