West Ham manager Manuel Pellegrini should give Jack Wilshere a start against Watford after the midfielder made a substitute appearance in Southampton game.

The 27-year old’s West Ham career has been plagued so far with injuries, and the midfielder has only made seven Premier League appearances so far this season.

This is the final fixture of the season, and Wilshere must start in place of Michail Antonio. He’s made a few substitute appearances in recent weeks but needs to get a start under his belt ahead of pre-season, and Pellegrini should allow this to happen against Watford.

This will be the final chance this season for Wilshere to show the Hammers fans what he’s made of, and prove why he’s being paid a whopping £100,000- a-week (Source: Spotrac).

In defence, Pellegrini must go with an unchanged back line, especially considering that this line-up kept an impressive clean sheet in the fixture with Southampton.

Felipe Anderson should also start the game replacing Grady Diangana, after he missed the last fixture due to a virus. The Brazilian has been one of West Ham’s most deadly forwards this season, scoring nine and assisting four in the Premier League, and should be given the chance to add to his tally against Watford on Sunday.

Arnautovic should retain his place up front for the Hammers after an impressive performance against Southampton, where he scored a brace. The Austrian, much like his Brazilian teammate, also has nine goals and four assists in the league this season.

The previous midfield paring of Mark Noble and Pedro Obiang should be refreshed and replaced with Declan Rice and Carlos Sanchez, as both players are available for selection. Rice will be returning from a virus, and should be tested alongside Sanchez, who has only played six games so far this season due to injuries.

Sanchez appeared as a substitute in the fixture against Southampton, and the £50,000-per-week player (Source: Spotrac) should be tested by Pellegrini in the final game of the Premier League season by being unleashed for a rare start.

With the line-up below, the Hammers could end the season on a high-note as this team could dismantle Watford. 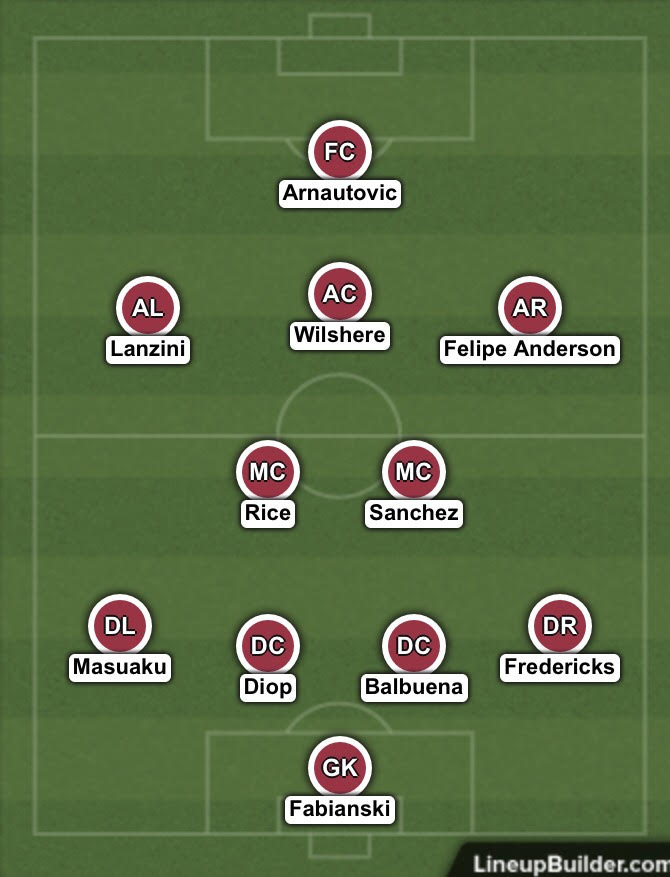