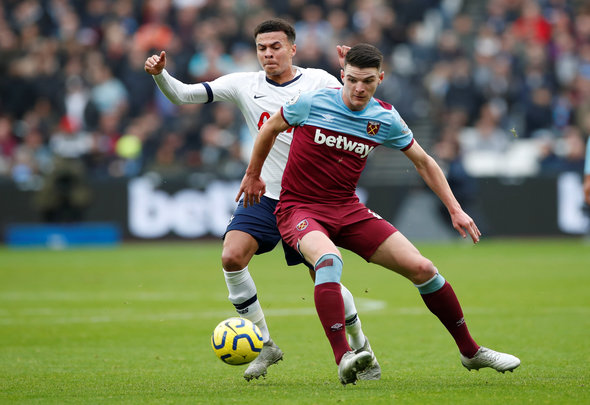 To say that things aren’t going too great for West Ham at the moment would be a bit of an understatement.

Just one win in nine Premier League games and a whole host of underwhelming displays on the pitch have really rocked the Hammers over the past couple of months, and unless something drastic changes in the very near future, this could prove to be a season to forget.

But of course, things can always get worse.

And the latest comments from midfield starlet Declan Rice will no doubt be giving many Irons sleepless nights.

Speaking on the Football Ramble Daily podcast, the England international said: “I think you’ve got to win stuff. You have to.

“Look at Liverpool last year, [Jordan] Henderson lifting the [Champions League] trophy and how much it meant to him. That’s what you want in your career. Look at John Terry’s career, how much he’s won; it’s scary.”

If that is the case, and if Rice is fixated on winning titles over the course of his career, then that would surely be bad news for West Ham.

There’s no saying that he wouldn’t be able to lift an FA Cup here or there with the Hammers, but the prospect of him lifting a league title seems almost non-existent.

As such, for him to achieve prolonged success over his career then the only realistic solution for him to leave east London.

Given how integral he has become to the Irons’ setup over the past few seasons, that would be potentially disastrous for the club.

It feels like an increasing inevitability that he will move away at some point, but the longer that the Hammers can hang on to their young talisman, the better.