Sometimes managers develop certain attractions to certain players, and for whatever reason their minds cannot be changed on them.

We’ve seen it at Liverpool with Jurgen Klopp and centre back Dejan Lovren, and it appears that the condition is prevalent in West Ham United boss Manuel Pellegrini, too.

Reliable Hammers news source Claret & Hugh claimed on Tuesday that the Chilean is refusing to give up on midfielder Jack Wilshere despite his myriad injury issues.

Pellegrini remains a massive fan of the England international, who is now back in training after injury. Indeed, it’s Wilshere who is likely to be called up to the starting line-up against Tottenham Hotspur on Saturday should captain Mark Noble not make the clash.

That’s despite the 27-year-old starting a grand total of six Premier League games since joining the east London outfit prior to the start of last season.

So the West Ham fans are likely baffled as to why their manager seems to have such a love-in with the former Arsenal man. Yes, he is a good player on his day, but he’s not been fit enough to show that regularly at the London Stadium, while he hasn’t performed at his best even when he has been available.

The statistics from both last season and this one show that to be the case. As per WhoScored.com, the Englishman has only got one league assist for the Hammers, while he has never averaged more than 0.3 shots or 0.6 key passes per game.

Furthermore, he is being dispossessed 1.2 times and having 1.3 unsuccessful touches per outing this campaign. His average WhoScored rating this term is an absolutely woeful 5.99.

Yet this is a player who Pellegrini clearly sees as the answer to what ails his reeling West Ham team. The club’s supporters will find that point of view very hard to get on board with. 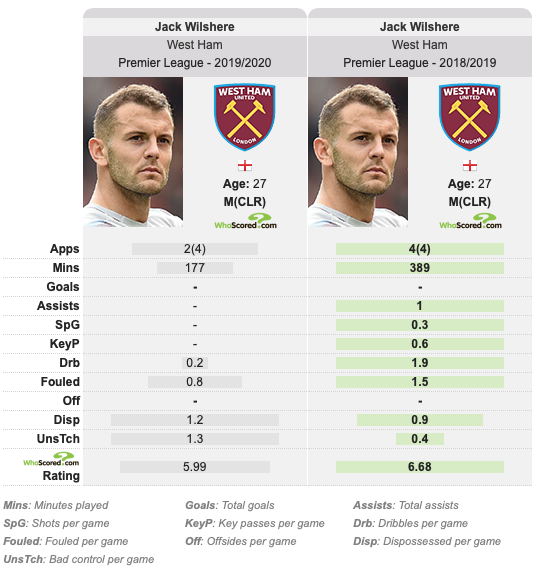