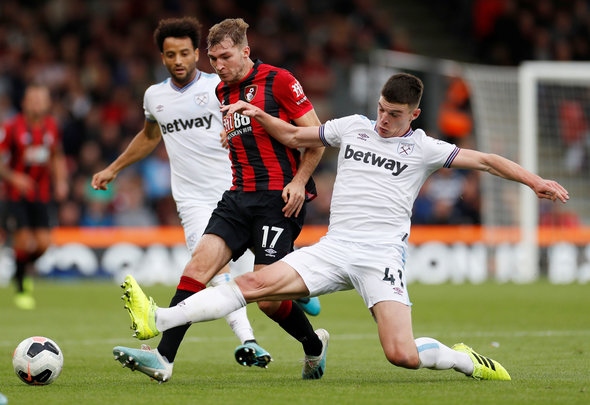 Danny Higginbotham gushed about the importance of West Ham midfielder Declan Rice and in doing so appeared to imply that the Hammers were built like a house of cards around the midfielder due to their reliance on him.

The Sky Sports pundit happily raved about the 20-year-old’s talents and pointed out how he gave his side’s defence an extra layer of protection when asked whether his presence allows Mark Noble to venture further forward.

“Like I say it’s not challenges, it’s awareness, presence of mind, knowing where the ball is going, once again here Cresswell is out of position and he (Rice) moves across so you still have your back four,” said Higginbotham on Football Centre (11:39am, Thursday, October 3rd).

“So yes West Ham commit men going forward but they always have that insurance (Rice) behind, he’s an integral part of this team as you see here the two centre-backs can go take care of Wilson (Callum) and Rice clears up in front of them.

“So West Ham, yes attack-minded, they’re looking good going forward, but what’ve they’ve got in Rice, they’ve got a player who will enable the players in front to express themselves.”

While it’s exciting to hear Rice draped in praise by Higginbotham, with the quotes above just scratching the surface, he inadvertently implies that everything rests on the midfield enforcer’s shoulders.

After all, he credits Rice for reassuring the Hammers’ defence and making it sturdier when players such as Aaron Cresswell gets dragged out of position, then claims the midfield enforcer is also the reason why West Ham can venture forward.

What’s more worrying about Higginbotham’s implication about Rice, is that it’s hard to argue with.

The 20-year-old has averaged an impressive 3.9 tackles per game, 2.4 interceptions and 1.1 fouls per game, which sees him break up play often, across his first seven league games of the season. (Source: WhoScored)

These numbers are all drastically higher than in his 2018/19 campaign.

Last season, across his 34 league outings, Rice averaged 2.9 tackles per match, 1.5 interceptions per match and 0.5 fouls per match to aid his side’s cause.

The Hammers’ defensive record has also looked notably more promising this season, and Rice’s numbers improving, could easily be argued as the cause behind the improvement.

West Ham had a very leaky defence in their 2018/19 campaign as they conceded 55 league goals, and only eight teams conceded more.

Yet so far this season, the Hammers have shipped only nine goals in seven matches which is made more impressive when you consider they lost 5-0 to Manchester City on the opening day of the season.

Also, Higginbotham might have a point about how Rice being so reliable has improved the Hammers attack as it lets forwards be able to venture forward carefree.

Last season, Rice was playing his first full season for the senior side as a defensive midfielder, he previously regularly featured as a centre-back, so those in front of him couldn’t be 100% sure about him.

The Hammers managed to outscore 11 sides in the Premier League in that campaign, they scored 52 goals, but this season they currently have outscored 13 teams as it stands and that’s only going to grow when you consider the club’s main striker, Sebastien Haller, is settling into the club after joining in the summer.

So now imagine, based on Higginbotham’s implication, if Rice had to miss games for a reason.

The Hammers sound like they would be lost without him as not only would their defence be vulnerable but their attackers will hesitant going forward.

So with that in mind, while you hope the Sky Sports pundit is wrong, it does sound like the Hammers are overly dependent on Rice and that perhaps they will collaspe without him to call upon.