Saturday’s 2-0 defeat against Everton is exactly the kind of outing that West Ham have been striving to eradicate for years now. Lacklustre and off the pace, there were large spells of the trip to Goodison Park when the Hammers looked vastly inferior to the Toffees, who themselves started the game in the bottom three. If there was a bright spark for the Irons, and it wasn’t easy to find one, you could argue that Andriy Yarmolenko did a fine job of keeping his impressive run of form going. Introduced as a second half substitute, the Ukrainian, who has three goals in the Premier League already this season, massively lifted the level of impetus on the field, and was probably the Hammers’ brightest player in the second half. Admittedly, he didn’t have much in the way of competition, but nonetheless, he did well. The 29-year-old has been like a new signing this season, and his average of 2.2 shots on goal and 1.8 key passes per 90 minutes, plus a Whoscored rating of 7.04, show just how significant he has become for the Hammers. It’s fair to say that after Saturday’s display, it will probably be a long time before Manuel Pellegrini thinks about benching him again. 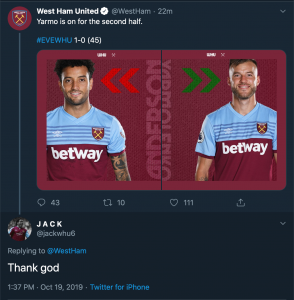