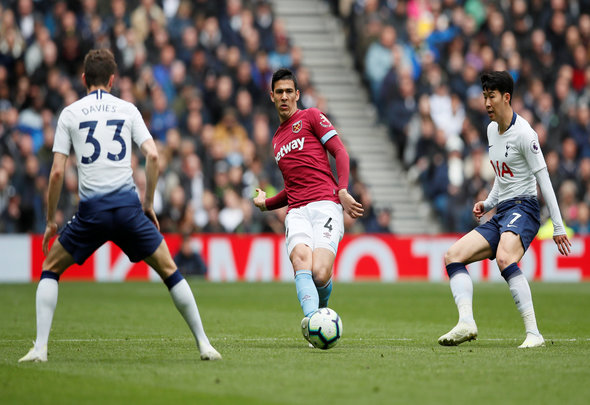 Paul Ince claimed he was unconvinced by West Ham defender Fabian Balbuena and this will surely leave many Hammers fans baffled.

The BBC pundit briefly ran through the Hammers defence on Monday and shared that the 27-year-old centre-back had not been convincing in his opinion, while also suggesting he had doubts about Arthur Masuaku and Aaron Cresswell.

“Yeah he’s not the answer (Don Hutchinson said about Arthur Masuku), I mean the goalkeeper has been fantastic, Fabianski.”

While it’s understandable why Ince has doubts about Cresswell and Masuaku, and it’s actually easy to agree with him on the fact that Issa Diop and Lukasz Fabianski deserve praise, it’s unclear why he hasn’t be convinced by Balbuena.

The 27-year-old had a very decent debut season at the London Stadium in his 2018/19 campaign after joining from Brazilian side Corinthians and surely did enough to convince fans and Ince of his ability.

Balbuena averaged a decent rating of 6.98 across his 23 league outings, formed a formidable partnership with Diop in the heart of the Hammers defence, proved to be powerful in the air as he won on average 3 aerial duels per game and even averaged a decent pass completion rate of 79.4%. (Source: WhoScored)

The no-nonsense centre-back also made a staggering 172 clearances in the league which was more than any of his Hammers teammate and also was the 14th highest amount in the Premier League out of any defender. (Source: Premier League)

If that still isn’t enough, Balbuena had a tackle success rate of 50% in his league outings, as per the Premier League, which is only 6% lower than Diop who Ince clearly rates based on his remarks.

So when you consider all that and the fact Balbuena faced an uphill battle adapting to the English Premier League having made the huge leap from Brazil’s top-flight, many West Ham fans will surely be baffled by Ince’s remarks on the centre-back as he clearly would have done enough to convince them.