The former Fulham and QPR midfielder asked his followers, via his Twitter account, on Friday who was currently the worse run Premier League club. 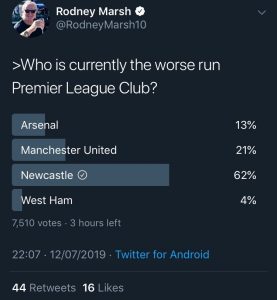 Given that Sullivan and Gold haven’t exactly done terrible at West Ham in recent times, it’s completely unfair for the Hammers to be an option in this poll.

After all, under Gold and Sullivan’s reign, the Hammers spent almost £100million on signing new recruits, such as Felipe Anderson, last summer and this made them the fourth highest spenders in the Premier League (Source: Telegraph).

The Hammers chiefs also haven’t avoided spending in the current summer window either as the club have already spent £24million on signing Pablo Fornals from Villarreal (Source: BBC Sport).

Also, it’s not just the transfer market where Gold and Sullivan have tried to do right by West Ham, the businessmen have tried to make the London Stadium feel more like home for the club in recent times.

While moving to the ground had it’s teething issues, some that still remain, Gold and Sullivan have tried to appease fans by shelling out on installing claret carpet as well as naming a stand after club legend Billy Bonds (Source: Football.London), so you can’t overly be too resentful towards them over the club’s current stadium.

Aside from what Gold and Sullivan have done, surely it’s an insult to them for West Ham to be included in this poll based on who else is listed.

Arsenal’s owners should be questioned as the London club only has a transfer kitty of £45million, as per the Telegraph, and Man United are seen as being so badly run that a lot of their fans have been using the “GlazerOut” hashtag to vent their fury (Source: Daily Express).

Also, one of Man United’s owners Darcie Glazer Kassewitz was previously reported by Manchester Evening News as using his shares in the club as collateral to take out a loan, and that doesn’t sound right at all.

The Magpies currently have no manager, are the only Premier League team not to sign anyone this summer and their owner Mike Ashley has still somehow not sold the club despite it being up for sale since 2017 (Source: The Guardian).

Given that’s only scratching the surface with the Magpies’ ownership issue, it’s clear Gold and Sullivan should take umbrage with Marsh over his poll.