West Ham co-owner David Gold sent a message to West Ham fans after the club confirmed they had sold out their season tickets for the upcoming campaign.

The Hammers’ official website stated on Friday that all 54,000 Season Tickets available for the upcoming season had been sold, which meant that for the fourth season in the row all available season tickets have been acquired.

Gold addressed the official ticket update on social media and shared he paid tribute to the club’s fantastic fans, especially as 94% of season-ticket holders opted to renew, which was a new club record. 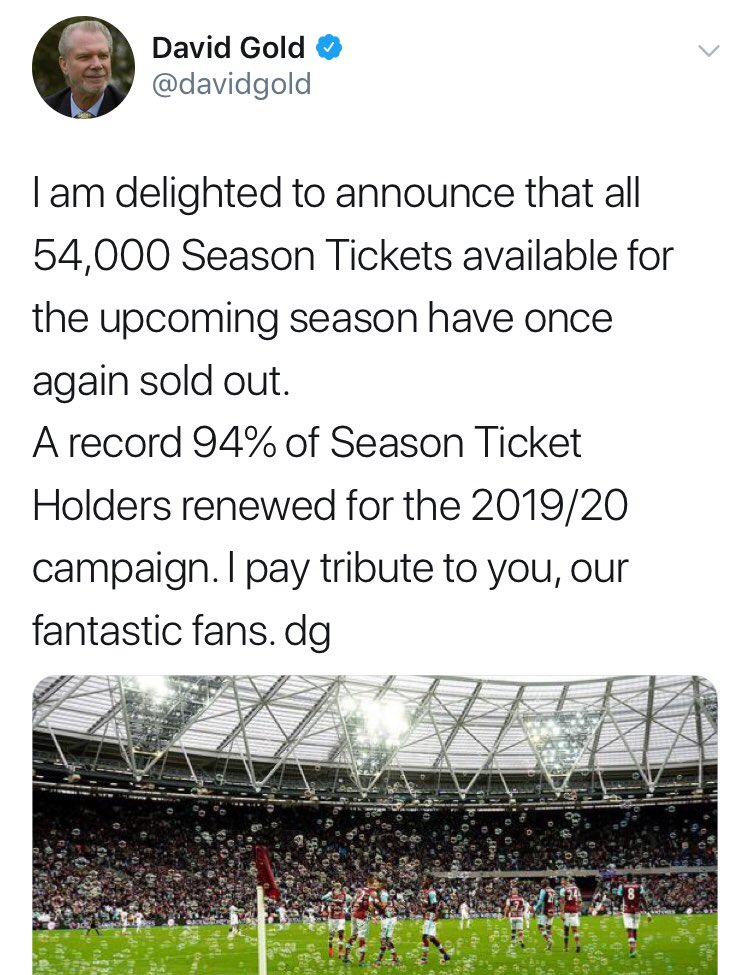 “I am delighted to announce that all 54,000 Season Tickets available for the upcoming season have once again sold out. A record 94% of Season Ticket Holders renewed for the 2019/20 campaign. I pay tribute to you, our fantastic fans. dg,” wrote Gold via his personal Twitter account.

West Ham had the third-highest attendance in the Premier League last season, averaging a crowd of 58,336, and it seems the London Stadium will generally be packed one again in the upcoming season (Source: Transfermarkrt). It’s no surprise that West Ham have managed to sell out their season tickets once again, with time to spare, as there’s a lot of reasons for fans to be eager to watch Manuel Pellegrini’s side in action. After all the Hammers smashed their transfer record by spending £45million on attacker Sebastien Haller, as per the BBC, and they also welcomed the highly-rated Pablo Fornals. The Spanish playmaker scored five goals, while assisting six, for a struggling Villareal side, last season and the thought of him being able to link up with Felipe Anderson and Manuel Lanzini at the Hammers is probably a thought that has Hammers fans excited. However, with West Ham having to host Premier League champions Manchester City in the opening league fixture, they face a tough time starting their campaign with a win.