Time to shine for Johnson

The breakthrough of academy stars in recent years is credit to the way that West Ham have approached the Premier League under Manuel Pellegrini.

Pellegrini has certainly found a great mix between youth and experience with the likes of Declan Rice being joined by Mark Noble and Pablo Zabaleta.

Grady Diangana and Ben Johnson have been two of the latest starlets to break on to the first-team scene and certainly have the chance to push on further next season.

Johnson especially has featured heavily for the Hammers in pre-season, in games against Manchester City and Fulham. The 19-year-old can play at either side of defence and in the heart of midfield, with his main role in friendlies being at full-back.

The defender recently admitted in an interview on West Ham’s official club website that he is ready to take his chance. Johnson said: “I’ve just got to really grasp this opportunity that I’ve been given. I’m grateful for the opportunity and now I’ve just got to keep working hard and pushing on.”

Johnson’s biggest chance to play is most likely at left-back, where he featured against the Premier League champions. Despite Arthur Masuaku recently signing a new deal with the Hammers, he and Aaron Cresswell have struggled to cement a starting spot under Pellegrini. 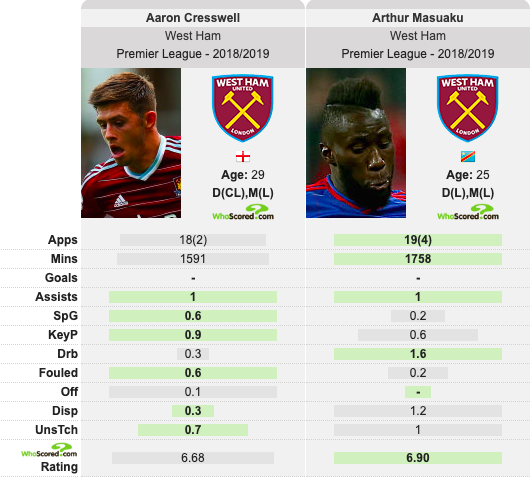 Looking at Cresswell’s and Masuaku’s stats via WhoScored, and it is clear to see where Johnson could exploit the defensive pair and jump the queue for the first-team.

The duo only delivered a single assist each and struggled to make any attacking impact on the Hammers. Both Cresswell and Masuaku failed to make a single key pass per game on average last season and Creswell in particular only managed to complete 0.3 dribbles.

Should the Hammers’ starlet want to grasp his opportunity next season as well as improving his attacking attributes, something which could elevate him above the experienced duo and cement his spot at the London Stadium.

Johnson would surely be set feature more should he improve going forward, and that would guarantee that his pre-season opportunity turns into consistent Premier League football next season.