West Ham forward Jordan Hugill is no closer to leaving the club, according to The Sun journalist Alan Nixon.

The 27-year-old has been heavily linked with a move to Wigan Athletic in recent days, as reported by The Sun, but it would appear that any prospective deal hinges on the Hammers agreeing some kind of pay-off with the striker.

He said: “Hugill has to get a lot of the money from the deal from West Ham.

“That’s not happened so far.” 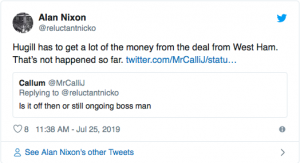 This situation could get very frustrating, very quickly for West Ham. Hugill is clearly surplus to requirements in east London, and you would assume that he has no real part to play for the Hammers given that he didn’t even feature in their preseason tour of China. He is, however, under contract, and there’s nothing to say that he has to leave the club unless the right offer for both him and the Hammers comes along. What that could mean for the Irons is a generous pay-off simply to get rid of him, but if that is the hit that needs to be taken to get a player who is clearly not good enough off the books, then so be it. Hugill is clearly a Championship striker, and his fairly underwhelming stats of 1.5 shots per game and 0.4 key passes per match [Whoscored] during his loan spell with Middlesbrough last year show a player who, quite simply, isn’t Premier League standard.