Heaven on trial with Hammers

The 19-year-old was released by the Foxes earlier this summer, having failed to make a single appearance for the first team, but did make two appearances in the Premier League 2 last season.

The 6’2″ ace [FM Database] featured for the Hammers’ U23s in their preseason friendly against Dagenham and Redbridge on Friday and is looking to secure a permanent deal. 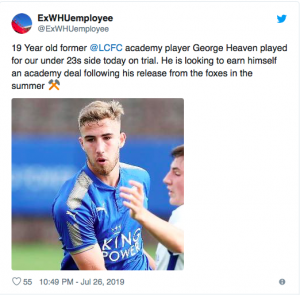 To be honest, most football fans won’t have heard of George Heaven yet, and there’s no real shame in that. The teenager has yet to make his senior bow, and he spent most of last season playing for Leicester City’s U18 set up. Just because he is an unknown entity, however, doesn’t mean that this deal can’t still be a decent one, should it happen. Heaven may have been released by the Foxes, but players slip through the cracks all the time, and just because one club doesn’t fancy him doesn’t mean that he can’t be a success with another. Chelsea let Declan Rice go as a youngster after all. Out of his 32 appearances in the U18s Premier League last season, Heaven managed three goals, which is a fine return for a centre-back, and gives you an idea of how much of a towering force the youngster can be. A “strong” performance alongside Reece Oxford on Friday, as reported by the club themselves, could be enough to convince them to take a punt on the young man.