Declan Rice has confirmed that he will continue to wear the number 41 shirt for West Ham next season, and it is surely the most definite indication fans could ask for on his future at the club.

The 20-year-old midfielder has become a key member of Manuel Pellegrini’s side since making his breakthrough from the academy, and his efforts for the club have earned him a place in Gareth Southgate’s England setup.

And it’s easy to see why. With a pass completion rate of 86.7% last season, as well as an average of 2.9 tackles and 1.5 interceptions [Whoscored], Rice is in many a complete defensive midfielder.

He is efficient on the ball and fearsome in his attempts to win it back, and he still has so much potential left to fill.

Who knows how far the starlet could go in the game, and it’s understandable that his performances are already attracting attention from elsewhere.

According to the Independent, Rice is on Manchester United’s radar as the Reds look to rebuild under Ole Gunnar Solskjaer this summer.

Understandably, the prospect of losing their newest hero after just one full season in the top flight has many West Ham fans worried, but the Irons will surely be ecstatic with his latest post.

Writing on his personal Twitter, the youngster said: “Had loads of people asking this… I will be keeping 41 for this season”. 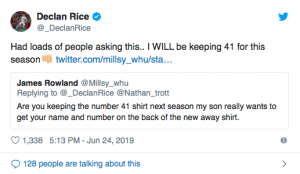 That is about as clear and obvious a statement of his intent to stay as you can realistically ask for, and it should be more than enough to convince supporters that Rice will be wearing clare and blue next season.

Ir would be strange and uncharacteristic of him to say something so definite if he knew it to be false, and on that basis alone, the Hammers should be rushing out to get their shirts printed, safe in the knowledge that Rice is staying put.