Manuel Pellegrini confirmed in his last pre-match press conference of the season that Andriy Yarmolenko is back working with the squad after his injury earlier in the season. The Chilean did confirm that the last game of the season was too much of an ask for the Ukrainian. Yarmolenko has been out injured since rupturing his achilles in the Hammers 1-0 defeat against Tottenham in October after a great start to the season for the club in joined in the summer. With Friday’s news, Yarmolenko will be fit and raring to go once pre-season starts and will be reintroduced at the beginning of the next Premier League campaign. West Ham paid £17.5million for the 29-year-old and he repaid that faith with two goals in his first five appearances. West Ham fans reacted to the news with great joy with one saying: “Masterclass 19/20 PL season from this guy incoming”. Another Hammers fan went on to add: “I can’t wait to see him playing again!”.

“Yarmolenko is already working with the squad now. He can’t play but is working 100%." – Manuel Pellegrini pic.twitter.com/QbIU4AgJsX

Forever West Ham picked out some of the best tweets below: 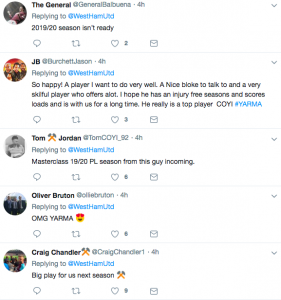 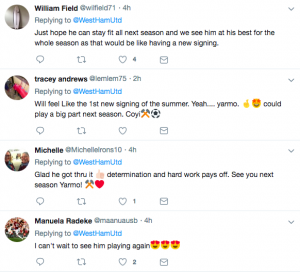