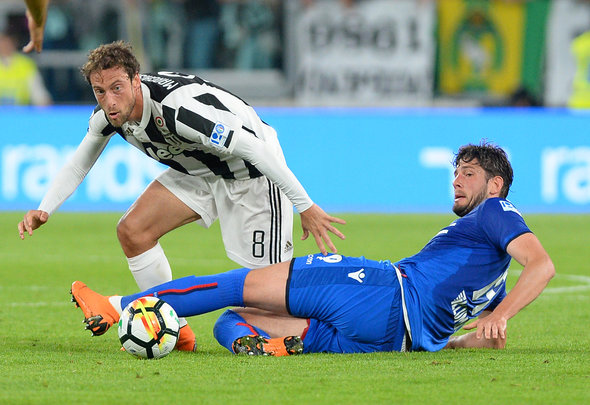 One of West Ham’s many shortcomings that were brutally exposed by Liverpool in the Hammers 4-0 defeat to the Reds on Sunday was a lack of quality in central midfield.

Not to say that Mark Noble and Jack Wilshere are not fine footballers, they are, but they were given the run around by Naby Keita, James Milner and Georginio Wijnaldum at Anfield.

Both players have a ferocity and bite in the centre, but they simply weren’t able to cope with the intricate football and relentless pressure of the Liverpool trio.

The team’s options in central midfield are hardly overflowing, having allowed Cheikhou Kouyate to join Premier League rivals Crystal Palace, while they seemed to think long and hard about whether to let Pedro Obiang rejoin Sampdoria and the position stands out as lacking amongst the talent present in other areas of the squad.

Luckily for the East London outfit, a sublime solution presented itself on Friday morning, as Juventus released a statement confirming that long-time midfielder Claudio Marchisio had had his contract terminated by mutual agreement.

That means that the Italy international is now available for any team to sign on a free contract. A signing on fee would have to be paid of course, as well as a hefty salary, but this is a no brainer for a club like West Ham.

Now, this move would be an extremely ambitious one, but the 32-year-old would instantly become the most talented midfielder in the squad, capable of delivering pin-point passes and snuffing out opposition attacks in equal measure.

West Ham have demonstrated their ambition this summer by bring in a top class manager and signing the likes of Wilshere, Felipe Anderson and Andriy Yarmolenko. So why shouldn’t they be able to snare Marchisio?

It may be a stretch, but the club could find the money to pay whatever wages he was getting at Juventus. The finances shouldn’t be a problem, it’ll be convincing the Italian that his future lies in this particular area of London that’ll be the tricky part.

However Marchisio may feel about a potential move to the Hammers is irrelevant at this stage, however, the club must first make a bid for his services. If they are successful, then they have to convince him. Do that, and this could be the signing to take the club to the next level.