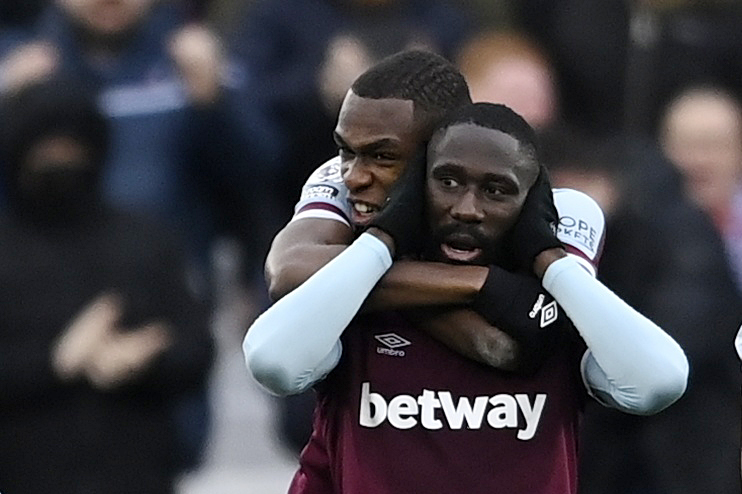 West Ham’s Arthur Masuaku came under severe scrutiny for his disaster of a display in the 3-1 London derby defeat at the Tottenham Hotspur Stadium back on March 20th.

The Congolese struggled against Spurs and the finger was firmly pointed at the player as well as his manager for deciding to start the 28-year-old.

Indeed, such was his level of performance, that Claret and Hugh have reported that West Ham are willing to listen to offers for the player they signed from Olympiacos back in 2016 for £6.2m.

Ben Johnson is more than capable of place-holding the role while Aaron Cresswell prepares for the crunch Europa League clash with Lyon on Thursday.

The DR Congo international made just 37 touches whilst losing possession on nine occasions in a performance rated 6.1 by SofaScore. Only centre-back Kurt Zouma (5.8) scored lower in the West Ham side.

Moyes’ decision to start the defender at left-wing-back backfired as he won just one of an attempted six duels at a loss rate of 83% whilst failing to make either a tackle, block or interception.

One completed cross and three failed dribble attempts highlighted a poor performance going forward in his first league appearance in over two months.

Currently on £40k-per-week the man brought to the club by Slaven Bilic could free up some space on the wage bill, and the emergence of Johnson has seen his appearances reduced to 12 in the Premier League this season.

He has registered just one assist and one goal as well as winning just 4.7 duels per game and making just 1.1 clearances. His impact clearly not being felt on either side of the ball.

The signs have long been there though, with Sky Sports man Matt Le Tissier ruthlessly slating the left-sided player for a “shocking bit of defending” in a past game against now-Championship side West Brom and fellow pundit Phil Thompson berating the player for a first-half performance that saw the player hooked at half-time with West Ham 3-0 down to Manchester City.

He received a rating of three out of ten for his lacklustre outing against Spurs from football.london who described his afternoon as “awful”.

They claimed that the decision from the West Ham manager to start the player was “poor” and a “costly one at that” making it seem likely that he will repeat the same mistake again.

As such, on the above evidence, Moyes must look to axe Masuaku from his starting XI going forward – and potentially for the remainder of the season, too. He’s too much of a liability for the Irons heading into a crucial run of games.

AND, in other news, Moyes must unleash £22.5m-rated attacker to take down the Toffees…