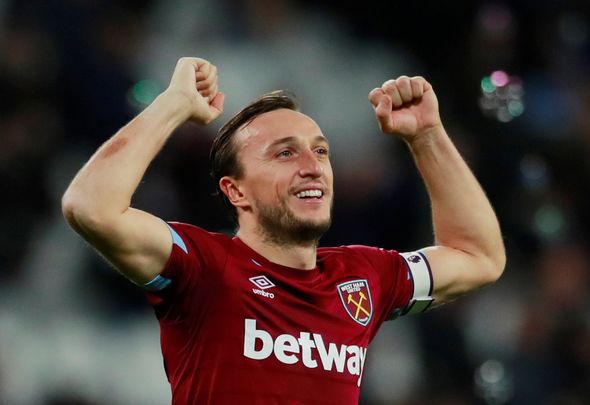 Mark Noble could be set to make his 500th appearance for West Ham this evening if David Moyes selects him for the relegation tussle with Watford. The Hammers legend would join an elite selection of club legends to rack up half a millennium of matches for the Irons and further add to his club-record 379 Premier League appearances.

The West Ham captain first appeared in 2004 and, aside from brief loan spells with Hull City and Ipswich Town, has been almost ever-present in the squad throughout his 16-year stay in East London. Many have been paying tribute to the one-club man on the eve of what would be a remarkable achievement, with former managers and fellow players lauding Noble with praise.

One ex-boss who had particularly kind words was Chelsea icon Gianfranco Zola, who compared the midfielder with a modern Italian legend, claiming his footballing intelligence was as good as Andrea Pirlo.

The 33-year-old will make his 500th #WHUFC appearance if selected for Friday’s clash with Watfordhttps://t.co/NZ9TtvGQi1

The two-time Champions League and 2006 World Cup winner was one of the most graceful midfielders of the 21st century, meaning Zola’s comparison between Pirlo and Noble, a player he managed for two years from 2008 to 2010, is high praise. Meanwhile, some supporters even suggested that Noble has some better attributes than the Italian playmaker.

He has a better passing range than Pirlo and is more two footed.

Other fans agreed with the former boss’ perspective and his average of 44.56 passes per match in the Premier Leauge, along with a 70 per cent tackle success rate, certainly indicate Noble is able to read the game in both attacking and defensive scenarios.

Can see where zola is coming from to be fair

Last week against Norwich City, Noble returned to the starting eleven after a three-game absence and put in a stellar performance to remind everyone what he is capable of when at his best. The midfielder used to play in an attacking role for England’s youth sides and upon returning there he recorded eight key passes to send the Canaries back to the Championship.

I would start exactly the same team that played against Norwich last week. Removing some defensive duties really allowed @Noble16Mark have a major impact on the result.

However, not everyone was convinced by the comparison. Given Pirlo made 116 appearances for Italy, including captaining the side at Euro 2016, the fifth most of any Italian, while Noble has never featured for England, it is an easy stick to beat him with.

So good he can’t even get an England cap

Zola got the sack after two seasons in the dugout of Upton Park for only keeping the Hammers in the Premier League but the skin of his teeth with a 17th place finish in 2010. But not everyone agreed with the connection the diminutive Italian made between the two central midfielders.

The only reason he is a “former” boss now 😂

As good as pirlo 😂😂 keep up the good work lads. Always make me laugh