West Ham United manager Manuel Pellegrini is expected to make just one change to his starting line-up for Saturday’s trip to Southampton.

The Hammers are coming off a fairly encouraging performance for the first hour against Arsenal on Monday, only to see it all fall apart in the final half hour of that 3-1 defeat.

And so, given the Chilean’s now infamous stubbornness, the only change the West Ham fans should expect is Issa Diop potentially replacing Fabian Balbuena at centre back.

Whether that sole alteration would be enough for the east London outfit to grind out a victory on the South Coast remains to be seen, however.

David Martin has established himself as the clear second choice at the London Stadium, and with Lukasz Fabianski not expected to return quite yet, the Englishman is almost certain to keep his place between the sticks here.

Ryan Fredericks is similarly solidified at right back, and the former Fulham man can expect to start once again on Saturday. Meanwhile, Aaron Cresswell will likely take his place on the left hand side of the defence, as well.

At centre back, there will probably only be the one aforementioned change. Supporters can surely expect to see the Diop-Angelo Ogbonna partnership restored at St Mary’s Stadium.

Mark Noble and Declan Rice are pretty much sure-fire starters every single game for West Ham at the moment, as much due to a lack of alternatives as anything else.

Robert Snodgrass will likely start on the right hand side of midfield once again, while the same can probably be said for the in-form Pablo Fornals on the left flank.

Pellegrini will almost certainly stick with the tactic of Felipe Anderson playing just off Michail Antonio, which he utilised to some decent effect on Monday. 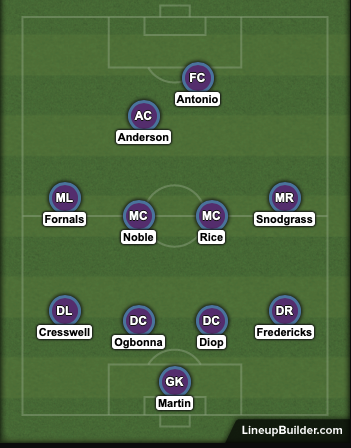