With every passing week, West Ham fans must be more and more bemused as to why Grady Diangana is currently tearing things up in the Midlands and not in east London. With the Hammers struggling to find their rhythm of late, they need a bit of magic now more than ever, and if Diangana’s outing for West Brom against Swansea City on Sunday showed anything, it’s that the lad has magic in abundance. In one clip in particular, as shared by Sky Sports on Twitter, the youngster manages to control a ball on his forehead several times before flicking over the nearest man and leaving him in the dust. It’s jaw-dropping stuff to say the least, and it was enough to get Hammers everywhere pleading for the club to bring him home. So far this term he has averaged 3.1 successful dribbles per game in the Championship, as per Whoscored, and that kind of directness and aggression certainly wouldn’t go amiss for a side who are floundering at the moment. Whether or not the winger is recalled early remains to be seen, but if he is, there will definitely be some happy customers in the capital. 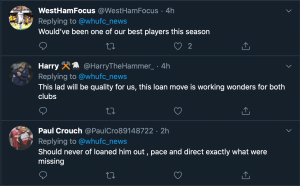