Silva is back in training

West Ham forward Xande Silva is back in light training, according to reliable club source ExWHUemployee.

The 22-year-old is yet to feature for the Hammers so far this term after having to undergo emergency service for a bowel obstruction over the summer.

But Ex has claimed that his return is approaching, writing on his personal account: “I think he has started light training”. 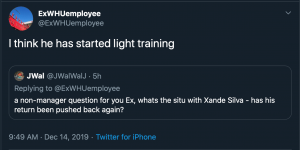 This can only be good news for the Hammers. Silva may not have featured all that much for the first team, but he is highly thought of in east London, and just having him back on the training pitch will be a real boost for player and club alike. Beyond that, given how poor the Irons’ striking options have been this season, he could well end up getting a more prolonged opportunity in the senior side. In his one and only Premier League appearance to date he actually looked pretty sharp, registering two shots, one key passes, and being dispossessed just once in 17 minutes, as per Whoscored. Obviously his injury has stunted his progress somewhat, but if he can build on that promising cameo and get his career back on track, both he and his side could benefit hugely. The Hammers need strength in depth, and if they can bring it through their own academy, even better.