Nobody wanted to say it, but Manuel Pellegrini will have known that West Ham United’s trip to Chelsea on Saturday was a must-win fixture.

The Hammers hadn’t won since September in the Premier League, and a London derby against Frank Lampard’s ruthless Chelsea side was not what they would have wanted.

That’s what made the 1-0 victory even sweeter, as no one expected West Ham to go to Stamford Bridge and win so when Aaron Cresswell curled an effort into the bottom corner, the rest of the second half would have felt like a lifetime for the travelling fans.

The Daily Mail had reported that the Chilean was set to be given the game against Chelsea, and Wednesday’s clash with Wolves to prove himself so to collect three points in the first could have saved his job.

Plaudits have come in ever since, with Alan Shearer selecting Cresswell in his Team of the Week, whilst placing Pellegrini in charge of the side.

The Premier League released his team on their official Twitter account on Wednesday afternoon, with Newcastle earning the most spots with three of their players being included. 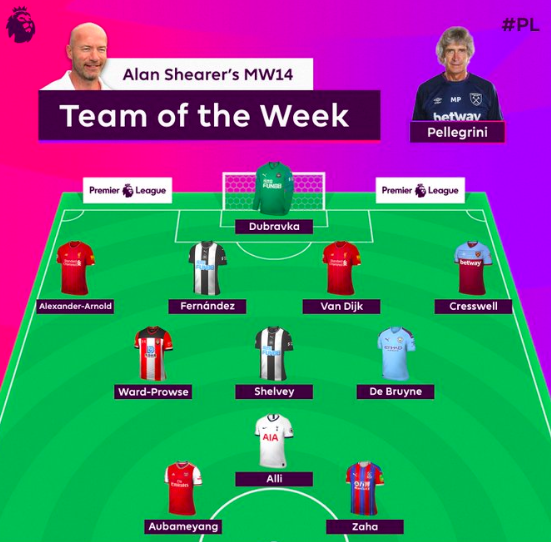 This could suggest that the South American could have turned a corner eventually at the London Stadium, as he has proven that he can finally make changes to adapt on a game-by-game basis.

Before the win against Chelsea, Pellegrini had highlighted how he was too stubborn to make changes and that was a massive downfall that was effecting his side in the past couple of months.

Two of the changes proved that Pellegrini is fighting to save his job, one was his decision to finally drop Roberto for David Martin. The other was making the big call to drop his record-signing Sebastien Haller for Michail Antoni0, and that took big nerves.

It all paid off at Stamford Bridge for Pellegrini, and Shearer’s decision to include him as the manager in his Team of the Week could suggest how he has turned a corner.