The Chilean has overseen a run of just one win in 10 Premier League matches in recent weeks, and it is understood that patience is wearing thin in east London.

“Discussions ongoing about whether he’s right man for the job.

“They desperately don’t want to have to change managers mid season but real concerns now about performances.” 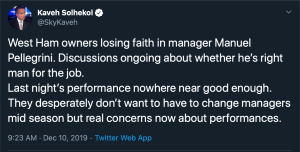 At this stage, it feels as if Pellegrini is hanging onto his job for dear life. The Hammers have been terrible in recent times, and unless something improves drastically in the very near future then it’s hard to see the South American keeping his job for much longer. At the end of the day, given the resources at his disposal, this side should flying a lot higher than they are. Of course, the board have to take their fair share of criticism for a perpetual cycle of underachievement over the past decade, but right now, if the question is whether or not Manuel Pellegrini should keep his job, the answer is probably not. Something has got to give, and unfortunately, the nature of modern football is that it’s usually the manager who is the first to go. After weeks of regression and growing frustrations, not too many people would be overly gutted by that prospect.