talkSPORT commentator Ian Abrahams and former Scotland international Ally McCoist have clashed over who is to blame at West Ham United.

The former is very much of the opinion that Hammers boss Manuel Pellegrini is failing to get the best out of his players, while the latter feels those same players have to take some blame for the team’s poor form.

“We can talk about coaches but surely, again, the players have to take responsibility as well,” McCoist said on talkSPORT.

Abrahams wasn’t having any of it, though: “They have, but to a certain extent you have to look at what inspires you, Ally. He’s a nice man, Pellegrini – my Dad was a nice man, I wouldn’t have him managing West Ham. Pellegrini does not inspire.”

To which McCoist fired back: “I never needed a coach to inspire me in my life. The inspiration and the desire to go and play should come from within.” 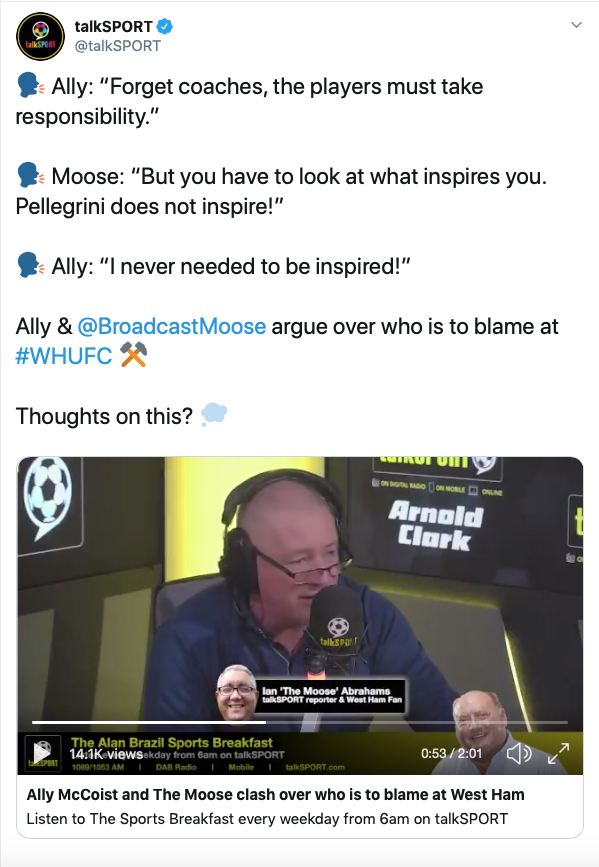 Both men have points, here, to be fair. McCoist is right to a certain extent that the inspiration and the desire to go out and work hard and play must come from the players themselves. You have to be self-motivated, which should really be a prerequisite for any footballer who has made it to the top level. You’d think that if these West Ham players are operating at Premier League level that they would be able to gee themselves up. However, Abrahams is right to criticise Pellegrini at the same time. The former Manchester City boss has failed to get his tactics right or to motivate his players. Modern day management has a lot to to do with individual man-management, and it’s clear that Pellegrini isn’t getting the best out of his players right now. McCoist is a former manager so he’s obviously going to side with the Chilean and demand that the West Ham players do more, but he’s got to be honest and admit that Pellegrini hasn’t done well enough this term.