ExWHUemployee: Holland has travelled to Wolves

The reliable club insider revealed on his personal Twitter account on Wednesday morning that the 21-year-old has gone with the senior team to Molineux.

Ex also confirmed that versatile winger-cum-forward Michail Antonio is a doubt for the clash with Nuno Espirito Santo’s men, which is the reason Holland has come along.

The youngster is yet to be seen in the Premier League this season, but has scored nine goals and bagged six assists in 13 games for the Under-23s [Source: Transfermarkt]. 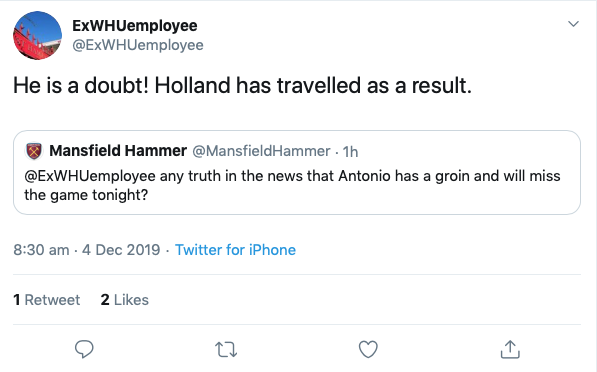 This is news that gives the Antonio update something of a silver lining. Obviously the fact that the 29-year-old, who has been so influential since returning to fitness in the last two games, is a doubt for Wednesday night is a big blow for the Hammers. However, the fact that Holland is the man who might benefit from his absence is very exciting for the West Ham fans. The supporters have been calling for the young winger to be more involved with the first team for quite some time now, and you have to say that he deserves it given his spectacular form for the club’s second string this term. He’s contributed to more goals than he’s played games for the U23s, so there’s no doubt that he deserves a chance to show what he can do for the senior side. Yes, he didn’t take his chance when he got it in the Carabao Cup, but that was in a woeful team performance against Oxford United. So, while we’re all hoping that Antonio pulls through, it wouldn’t be the worst thing in the world for Holland to be given an opportunity.