West Ham United welcomed Newcastle United to the London Stadium on Saturday in desperate need of three points after a winless October. It was somewhat surprising to see Manuel Pellegrini name an unchanged team for the clash with the Magpies – something which backfired very quickly in East London. That meant Roberto kept his spot in goal, and the Spaniard didn’t do anything to stop Steve Bruce’s side going two goals ahead inside 25 minutes. Newcastle hadn’t scored twice in a single game this season before Saturday’s meeting, and Roberto came under massive criticism for both goals. The Spaniard was static when watching Ciaran Clark nod his side ahead, and then drifted into no man’s land for the second from Federico Fernandez. West Ham are desperately missing the injured Lukasz Fabianski at the moment, and many Hammers fans took to Twitter to slam the keeper for his efforts, with one even claiming that Pellegrini’s side will not win a game with him in the side this season. 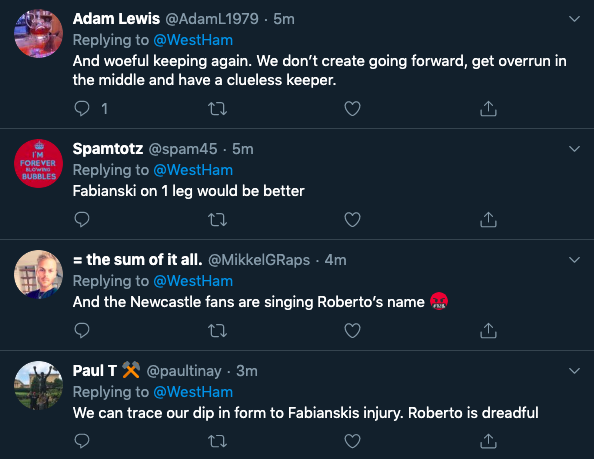