On the face of it, it doesn’t make much sense for West Ham fans to be upset about the prospect of recalling Grady Diangana from his loan spell at West Brom. After all, football is about winning matches, and the most effective way of doing that is to have all of your best players at your disposal. And the 21-year-old is starting to look like a real talent. Four goals and three assists in the Championship already this season, not to mention a Whoscored rating 7.26, the 16th highest in the entirety of the division – the winger is moulding himself into a serious proposition. His game is well-rounded too, with 1.7 shots per game, 1.8 key passes, and 2.6 successful dribbles. Diangana can do it all, and so why wouldn’t you want him on your team? All of that being said, you have to respect where these fans are coming from. Diangana probably wouldn’t be starting every week for the Hammers, barring some kind of massive injury or overhaul of Manuel Pellegrini’s pecking order, and as such it makes far more sense for the youngster to be playing every week and getting the experience he needs to become a better player in the long run than to recall him for a short term and ultimately pointless gain. Leave him where he is. 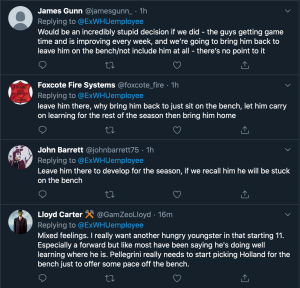