West Ham are considering bring Grady Diangana back from his loan spell at West Brom early, according to reliable source ExWHUemployee.

The wide man has impressed so far this season, hitting four goals and three assists in the Championship, and his form is said to be tempting his parent club to bring him back from the midlands earlier than initially anticipated.

Writing on his personal Twitter account, Ex said: “It is something that we are considering at the moment but no final decision has been made.” 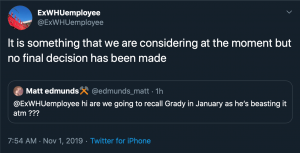 There are certainly pros and cons for bringing Diangana back early. On the one hand, he has been superb this season. Aside from those seven goal involvements, he has also managed 1.7 shots, 1.8 key passes, and 2.6 successful dribbles per game, as per Whoscored, not to mention a match rating of 7.26. In short, he looks to be growing into a well-rounded and impressive attacking talent, as the Hammers must have hoped he would during his spell in the Championship. In that sense, a recall isn’t a dreadful idea. The conflicting school of thought, however, is that Diangana should be left well alone to continue his development this season. Is he getting in that West Ham starting lineup if he comes back? Perhaps not, and if that is the case then far better it be for him that he is playing every week and gaining experience. In the long term, leaving him where he is might be the best plan.