Vazquez swoop would only paper over cracks at West Ham

West Ham United linked with a highly-rated playmaker from Spain? Where have we heard that one before? Oh yes, and how did that go, exactly?

Pablo Fornals arrived at the London Stadium for big money and an even bigger reputation last summer, but he is yet to score a Premier League goal for the club and is thought to be one of the key reasons why director of football Mario Husillos is under pressure.

Doesn’t that seem a bit strange to you? I mean, really, what would this say about manager Manuel Pellegrini? Fail with one Spanish playmaker, bring in another. That’s not a tenable strategy, Manuel.

Indeed, this reported swoop would surely only be papering over the cracks in east London. Surely the Irons need to be trying to bring out the best in their current batch of creative midfielders, not simply looking to buy new ones.

Improving the players you already have at your disposal is the sign of a good manager and, while Pellegrini did a decent job of it last season, he is floundering in his second campaign at the London Stadium.

Plus, would Vazquez even be worth pursuing? He’s a good player, no doubt, but is he any better than what the Hammers already have on their payroll?

When you compare his performances this season to Felipe Anderson’s, Andriy Yarmolenko’s and Manuel Lanzini’s, the statistics would indicate that the answer to that question is an emphatic no.

As per WhoScored.com, the 28-year-old is averaging the fewest shots and key passes per game of the quartet, while he is completing the second fewest dribbles as well.

Furthermore, he has failed to bag an assist, is fouled the joint least of the group, and is recording the most unsuccessful touches per game, too. Oh, and his average WhoScored rating per outing is the worst of the foursome as well.

All in all, then, you very much get the sense that this is a potential move best left alone. Better for Pellegrini to concentrate on galvanising what he already has at his disposal. 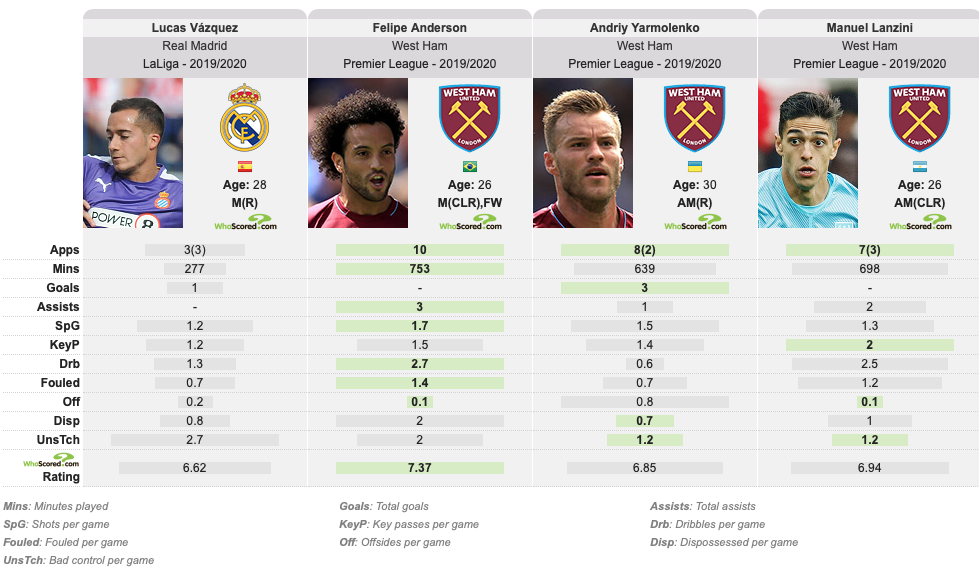