Rice on track for Hammer of the Year

Thankfully for West Ham fans, this season still has a way to go yet.

The Hammers have been pretty dreadful in recent weeks, and that are now five games without a in the Premier League.

But there is still time to turn things around, and the hope will be that they can begin that process by beating Bournemouth on Saturday afternoon.

As it’s so early in the season, it’s perhaps a bit odd to be discussing player of the year candidates, but according to reliable source ExWHUemployee, one man is already a standout.

Writing on his personal Twitter account, responding to a question on whether Declan Rice was favourite to be crowned Hammer of the Year, he said: “I think he will ultimately end up winning it, yes.” 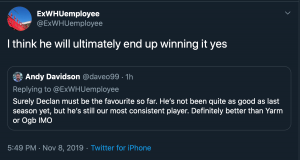 And it’s not hard to see why Ex thinks that.

Rice has been magnificent again this season.

So far he has averaged three tackles per game, as well as 2.1 interceptions, as per Whoscored, not to mention a pass completion rate that is just a shade beneath 90%.

He is solid and dependable, and sometimes it’s easy to forget that he is still only just 20.

Rice’s future is destined to be massive, and if he were to be given the player of the year accolade come the end of the season, then it would almost certainly be a just reward for the considerable effort he has put in this term.

His profile is only going to continue rising, and it does feel as if the gong is nailed on for him at some stage during his career.