Noble to have scan on ankle injury 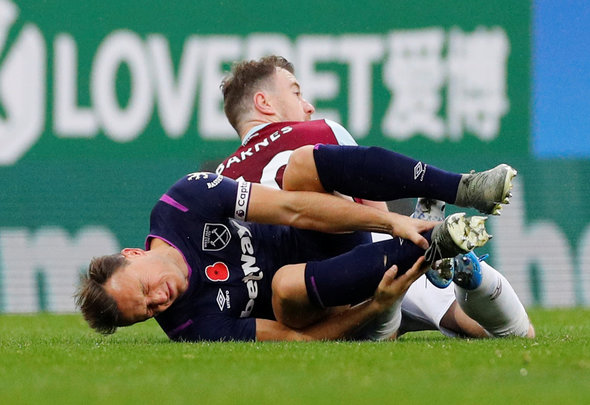 West Ham United captain Mark Noble is set to have a scan on Monday on the injury he suffered against Burnley on Monday, according to Claret & Hugh.

The reliable Hammers news source claims that the 32-year-old will have to be assessed next week to see how badly he damaged his ankle in the 3-0 defeat at Turf Moor.

The Englishman was forced off during the first half of the Clarets clash, to be replaced by Andriy Yarmolenko, and all we know at the moment is that he twisted his ankle.

This is a big blow for West Ham, and make no mistake. Noble isn’t a flashy player, he’s not universally praised and touted with mega money moves to pastures new. However, he is a quality operator who has been consistently producing for the Hammers for over a decade now. This season, too, he’s been very solid alongside Declan Rice in the middle of the park. Without him manager Manuel Pellegrini would likely have to turn to Jack Wilshere (if he’s fit – a big if), Carlos Sanchez or shift Robert Snodgrass into a deeper role despite him impressing in front of goal recently. The statistics show, though, that Noble would be hard to replace. As per WhoScored.com, Noble is averaging one tackle, 3.1 long balls knocked forward to the attackers and a healthy pass success rate of 84.8%. Those aren’t massively gaudy numbers, but he is a calming presence in this West Ham team, someone they would miss dearly if he faces significant time on the sidelines.