No arguing with Cascarino’s Roberto verdict

There aren’t many footballers who have gotten off to worse starts at their clubs than goalkeeper Roberto at West Ham United this season.

The Spaniard has come into a difficult situation at the London Stadium – filling in for top class number one Lukasz Fabianski – and has roundly failed to adequately replace the Poland international.

His string of sub-standard performances continued on Saturday in the Hammers’ 3-2 defeat to London rivals Tottenham Hotspur, and former Republic of Ireland international Tony Cascarino was seriously dismayed by his display.

“I can’t remember watching a goalkeeper, who I have seen, poorer than Roberto in the West Ham goal,” he told talkSPORT on Sunday.

That is very much true for most of us, which gives rise to the question: just how bad is David Martin? The former Millwall stopper cannot even get a game ahead of this woeful Spaniard, so he must be pretty awful.

Ultimately, though, there is no arguing with Cascarino’s verdict. The 33-year-old was weak for Son Heung-min’s opener on Saturday, while he made a mess of Harry Kane’s strike as well.

Plus, his distribution was dreadful, and his command of the penalty area was non-existent. We all thought the nadir was Roberto’s Burnley performance, but Manuel Pellegrini has somehow kept faith in his beleaguered ‘keeper. Now, what does that say about the Chilean?

Cascarino’s right, it’s hard to recall a goalie as bad as Roberto, certainly one who was continually backed by his manager for any length of time. You have to feel for the West Ham fans right now, because nothing is going right in east London. 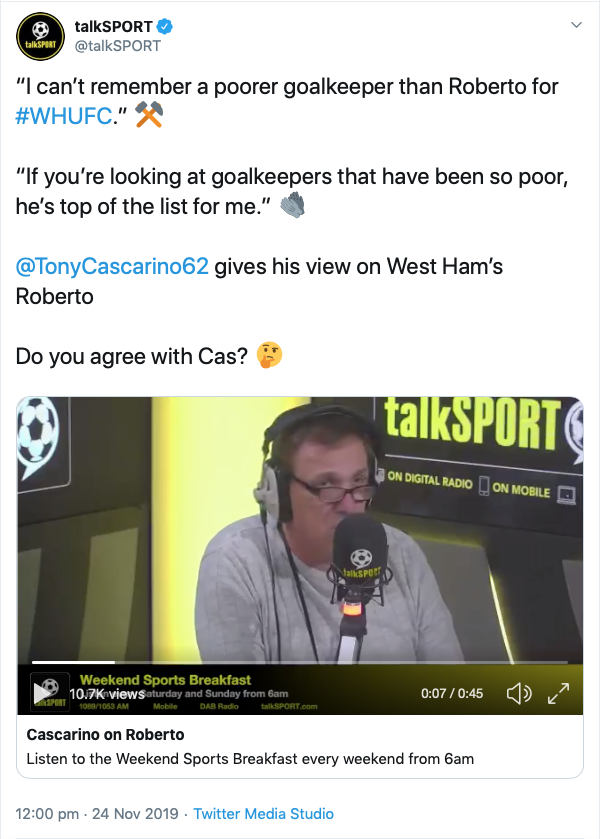