Matic move would be a disaster

West Ham United have encountered many problems over the years from being too willing to pay big names and past-their-best players far too much money to come in and solve all their issues.

We’ve seen it time and time again, as recently as last January when manager Manuel Pellegrini somehow convinced the Hammers board to shell out for an until-recently-suspended Samir Nasri.

So it’s very concerning that amid their current slump, the Irons have seemingly fallen straight back into old habits. That’s because 90min.com reported on Wednesday that Pellegrini’s team are eyeing a move for out of favour Manchester United midfielder Nemanja Matic, who could leave the Red Devils as early as January.

This is a transfer report that shows that the east London outfit are still the same old Hammers. This would be an absolutely bizarre swoop from a West Ham point of view.

The Serbian international has been out of favour all season long at Old Trafford, starting only two Premier League games for Ole Gunnar Solskjaer’s side to date.

We all know this is one of the worst Man United teams in recent memory. So, with that said, why would Matic be good enough to get in this West Ham side? He’s not, end of story.

The statistics from this campaign demonstrate as much. As per WhoScored.com, Matic only leads West Ham’s central midfielders Declan Rice and Mark Noble in one defensive category this term, despite being a purely defensive-minded midfielder.

Rice has the beating of both Matic and Noble in average tackles, interceptions, clearances and blocks per game, while Noble is the main man when it comes to not being dribbled past. Then there’s passing, where the 31-year-old is averaging fewer passes per outing than the two West Ham men and is less accurate with them.

So this is something that from a footballing point of view simply doesn’t make sense. Matic has been past his best for a while now, so why are West Ham even considering this? 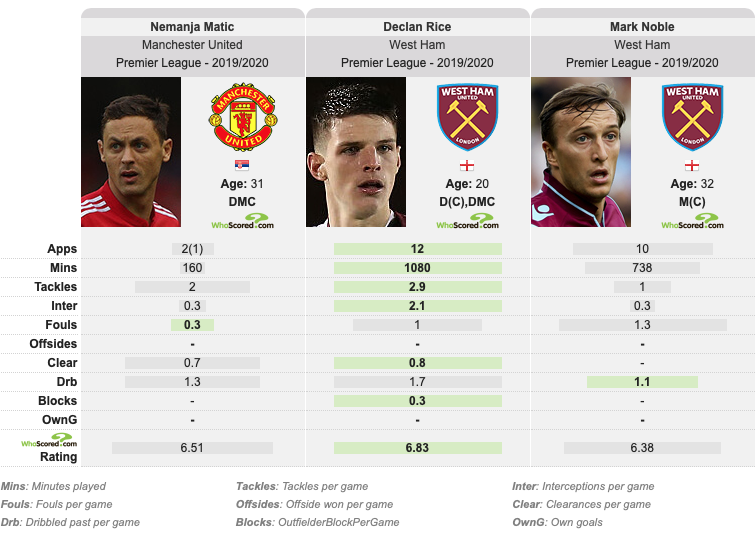