Journalist Sam Inkersole believes that West Ham United defender Angelo Ogbonna’s ‘stock has risen’ of late despite being left out of the team recently.

The Italian international has seen Fabian Balbuena take his place alongside Issa Diop for the last three games, and Inkersole believes the Paraguayan’s poor performances have had a positive impact on Ogbonna.

“Balbuena’s form has been very sketchy since his recall to the side and Ogbonna was one of, if not the, best Hammers player of the course of the early season,” he wrote on the Football London website.

“He’s still a winner in our eyes despite the fact he has been axed from the team for three matches. There is plenty of clamour for the experienced defender to be recalled for the visit of Spurs next weekend to London Stadium. It shows how much his stock has risen in the eyes of the fanbase in east London.”

It has been absolutely bizarre to see Ogbonna relegated to the substitute’s bench for the last three games, because he has arguably been West Ham’s best centre back so far this season. That’s something that the statistics back up, as well, making manager Manuel Pellegrini’s decision all the more baffling. As per WhoScored.com, the 31-year-old leads Diop and Balbuena in average tackles, clearances and blocks per game, while he commits the fewest fouls and is dribbled past least often. Additionally, Ogbonna has the highest average WhoScored rating per outing of 6.94 compared to Diop’s tally of 6.67 and Balbuena’s 6.25. It seems clear, looking at that, that Ogbonna and Diop is the Hammers’ best centre back partnership, while that gives Pellegrini a nice right-left foot balance at the heart of the defence. The Italian’s transformation from an error prone liability to arguably the team’s most reliable defender has been fantastic to witness, and a return to the starting line-up seems like the only logical step for Pellegrini. 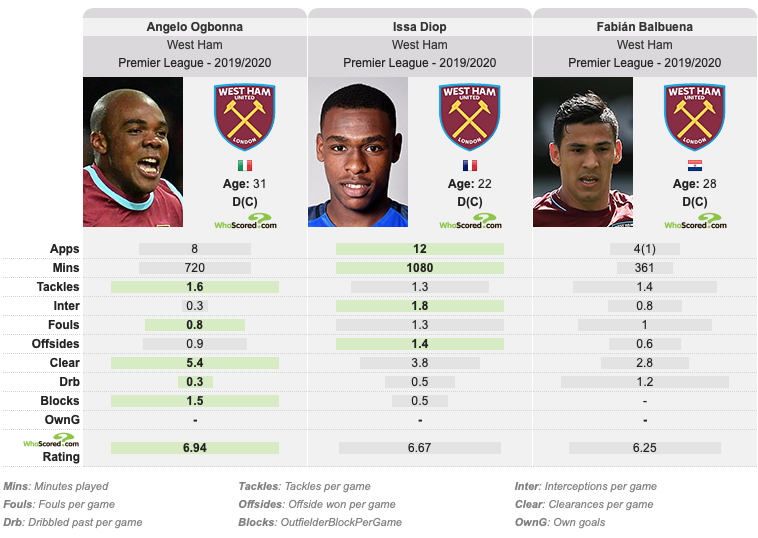