Fornals must be used as a 10

By now we all know that West Ham United manager Manuel Pellegrini is about as wedded to his favoured 4-2-3-1 formation as it is possible to be.

There has been barely a sign that he would even contemplate shifting away from it, even with the Hammers in the midst of a run of seven games without a win.

However, he has been left with something of a dilemma by the twin injuries suffered by captain Mark Noble and playmaker Manuel Lanzini against Burnley last weekend.

The club revealed on its official website that Lanzini is out for a significant amount of time after fracturing his collarbone, while Noble has had to have a scan on the problem he sustained in the defeat to the Clarets.

Noble’s injury should mean that veteran Robert Snodgrass shifts back into a deeper central midfield role, and the question is then who should take up Snodgrass’ role in attacking midfield?

The answer, you would have thought, is obvious. It’s got to be Pablo Fornals. The summer signing has been woeful thus far, it’s true, but he has been played out of position on the left hand side more often than not.

At Villarreal last season he made 30 of his 50 appearances from the number 10 position. In that role he scored four of the five goals he netted all season [Source: Transfermarkt].

And when you compare the statistics from what he achieved last term to how he has performed for the Hammers, it’s clear that he is better off playing as a number 10.

As per WhoScored.com, the 23-year-old averaged more shots, key passes and successful dribbles per game last campaign, while he was fouled more often and caught offside less frequently. Furthermore, his average WhoScored rating of 6.71 was comfortably better than the 6.21 he has achieved in east London.

It seems clear, then, that to give Fornals the best chance of success at the club Pellegrini needs to move him into the number 10 position. Plus, it allows him to maintain his precious 4-2-3-1 formation, while hopefully pushing the Spaniard closer to the isolated Sebastien Haller.

This positional switch could be just the thing to give the former Villarreal man a fresh lease on life. 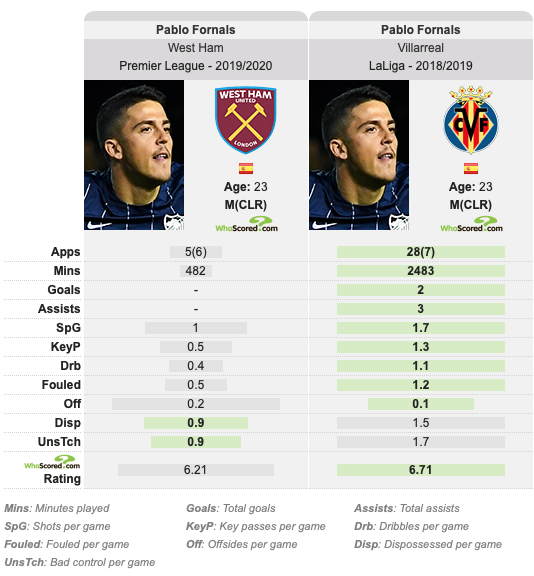