West Ham United manager Manuel Pellegrini would be wise to make wholesale changes to his team for the trip to Burnley on Saturday.

The Hammers were flattened 3-2 at home to Newcastle United last time out, and the Chilean would be wise to make six changes as a result.

While you can never be confident of securing a result with this West Ham team, those six changes could be enough to see the Irons smash the Clarets.

Roberto does seem to have Pellegrini’s trust, but he has simply been horrendous since coming into the team. With Lukasz Fabianski still out injured, it’s time to give summer signing Martin a try.

Meanwhile, the full-backs both need to be swapped around. Zabaleta was given the absolute run around by Allan Saint-Maximin last time out, while Cresswell was poor as well. Fredericks and Masuaku must replace them.

Pellegrini’s recent determination to pair Issa Diop with Balbuena has been bizarre. Ogbonna has been one of the Hammers’ best players this campaign and so he must come in for the Paraguayan at centre half.

Noble was far from the worst offender against Newcastle, but a Declan Rice-Robert Snodgrass partnership in the middle of the park seems to be just what the doctor ordered.

Further forward in attacking midfield, Andriy Yarmolenko should get the nod out wide on the right. Meanwhile, youngster Holland deserves a first team chance with Anderson woefully out of form.

Lanzini must take Noble’s spot in the team, but it’s paramount that he plays right up alongside lone striker Sebastien Haller. The Irons need to give the Frenchman more support, and Lanzini is the man to do it. 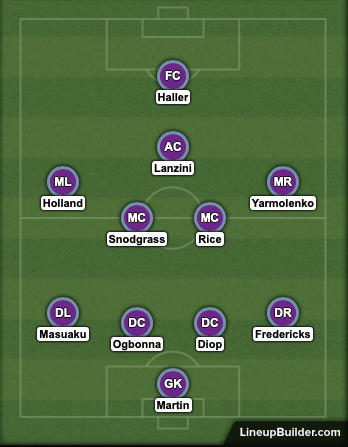