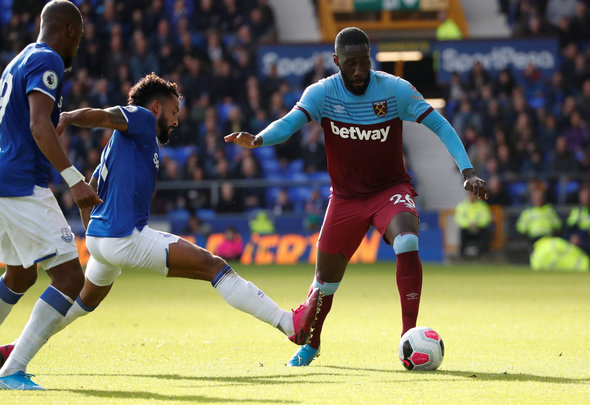 The ears of West Ham defender Arthur Masuaku should be burning after Danny Mills gushed about how good Bernard was for Everton on Saturday.

The Brazilian attacker scored the Toffees’ opening goal of their 2-0 win over the Hammers on Saturday, and the Sky Sports pundit was blown away by how good Bernard’s goal was.

“It was incredible from Bernard wasn’t it?” Mills told Football Insider.

“Great skill, he never gave up and it looks like the West Ham players switched off for a second and thought the ball’s gone out of play or he’s lost that one.”

However, Mills’ glowing endorsement of Bernard does reflect badly on Masuaku.

While Mills refers to multiple West Ham players switching off, which allowed Bernard to have a chance at goal from such a tight angle, when you re-watch the goal the biggest guilty party for the Hammers is the left-back.

The 25-year-old is caught slightly out of position, sees Theo Walcott’s through ball roll past him to Bernard, and while he does try to get back in the box to block the winger, though he gets bamboozled left, right and centre, he does seem to stop tracking Bernard once he thinks the angles too tight.

Hammers goalkeeper Roberto easily should have done better to protect his near post, but Masuaku shouldn’t have switched off and downed tools, as if he had continued to put his body in the way, it may have been a different story.

Overall the left-back didn’t have the best game on Saturday as his pass completion rate was a lowly 70.3% and while he did make two tackles, he also made two fouls which didn’t help the Hammers’ cause. (Source: WhoScored)

The 25-year-old can be unreliable at the back but he probably wasn’t helped by messing up so early in the game, Bernard scored in the 17th minute, and you have to believe he didn’t help himself by losing focus so early in the match as that set the tone.

Mills may have opted to focus on how Bernard took full advantage of the likes of Masuaku switching off, but that shouldn’t stop the left-back feeling like the pundit’s praise of Everton’s winger reflects poorly on him.