For a long time it has appeared that the Hammers boss was unsure on the left sided duo, but in recent months he has doubled down on Messrs Cresswell and Masuaku.

Despite that, London Football News reported on Tuesday that the Irons have joined the race for Queens Park Rangers left back Ryan Manning, along with top flight rivals Watford, Southampton and Newcastle United.

The problem with that is that Pellegrini has really committed himself to Masuaku and Cresswell, all within the last few months. The former is under contract until 2026 after signing an extension in the summer [Source: Spotrac], while Cresswell was extended through to 2023 earlier this month, as per the club’s official website.

So that’s why this sudden interest in Manning makes absolutely no sense. Pellegrini is obviously very high on his current left backs, which suggests that this might be more director of football Mario Husillos sniffing around rather than the Chilean.

However, is that the best idea? Unless the club have plans to sign Manning and sell one of Cresswell and Masuaku, with their extensions pure cold-hearted business to ensure a bigger transfer fee, then this is just bizarre.

Even then, though, would Pellegrini be on board with it? He’s clearly committed to the two left backs he has and therefore likely wouldn’t take too kindly to one of them being pushed aside. With that said, what is Husillos thinking, here?

Well, he’s probably considering the fact that Manning has played really well this season. As per WhoScored.com, the QPR star is averaging more tackles and interceptions per game than the West Ham duo, while he is being dribbled past less often.

Alas, the club’s decision to extend Cresswell has likely rendered this story moot. Time for everyone to move on, including Husillos. 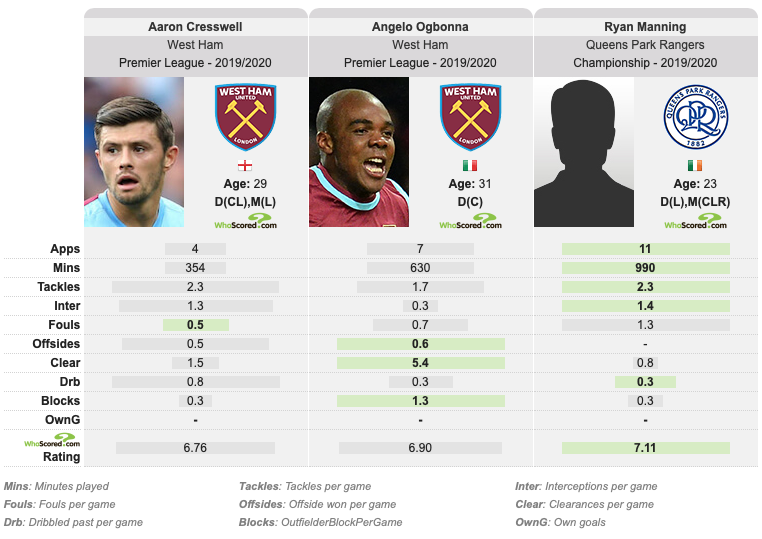