The Hammers will be joined by scouts Watford and Norwich City at the Champions League side’s match this weekend.

It is also understood that the Irons had scouts watching the 3-2 defeat to German giants Bayern Munich on Tuesday evening.

The report does not name any specific targets who West Ham may be scouting. 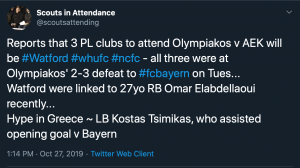 This is good news for West Ham, surely. Obviously, there are no indications as to who the Hammers are after, and scouting missions are no guarantee of future business, but at the very least it shows that the Irons have got one eye on the transfer market as we begin to get closer to the January window. Certainly, Olympiakos have a lot of quality players amongst their ranks, and they haven’t looked too far out of their depth in the Champions League, despite sharing a group with Bayern Munich and Tottenham. You would also hope that the Greek league would provide a less competitive and expensive market to dip into, and if the scouting is done properly, there could be gems waiting to be unearthed.