West Ham United manager Manuel Pellegrini is likely to make just one change for his team’s clash with Newcastle United on Saturday.

The Hammers head into the London Stadium contest without a win in their past five games in all competitions, but will be facing an eminently beatable Magpies team.

With that said, and after halting the rot with last weekend’s 1-1 draw with Sheffield United, the Chilean will most probably make only the single alteration from that game.

Centre back Angelo Ogbonna, one of the stars of this season for Pellegrini’s side, can expect to come back into the team in place of Fabian Balbuena.

In between the sticks, back up Roberto will almost certainly take the reins once again with Lukasz Fabianski still out injured. The Spaniard has done a decent job in recent weeks, easily enough to keep David Martin out of the starting line up.

Veteran Pablo Zabaleta put in a solid performance against the Blades and will likely keep his place ahead of Ryan Fredericks as a result. Meanwhile, Aaron Cresswell will surely retain his starting spot, as well.

As mentioned, Ogbonna is expected to come back in for Balbuena. The Paraguayan was OK last weekend, but Ogbonna has been one of West Ham’s best players this campaign. Alongside him, Issa Diop will surely start once again.

Declan Rice and Mark Noble are the established central midfield partnership for a reason, and will almost certainly continue against the Magpies. Slightly further forward, last week’s goalscorer Robert Snodgrass will likely keep his place.

Andriy Yarmolenko and Felipe Anderson are the obvious choices on the wings at the moment, and will surely start here. Ahead of them, Sebastien Haller will most probably lead the line on his own once again. 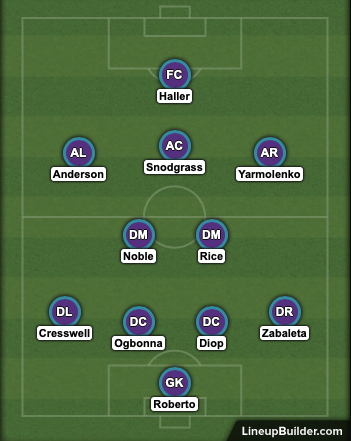