The Argentine international hasn’t started since the goalless draw with Aston Villa during the middle of last month due to injury, but returned off the bench against Bournemouth last time out.

With that said, the 26-year-old will likely come in for the disappointing Pablo Fornals. Goalkeeper Lukasz Fabianski has been ruled out for a couple of months after going down against the Cherries, and so Roberto will surely replace him here.

Those two changes are most probably going to be the only ones Pellegrini makes for the London Stadium clash between two similarly in-form teams.

As mentioned, Fabianski’s unfortunate injury setback will almost certainly see summer signing Roberto man the sticks for the foreseeable future. Meanwhile, Ryan Fredericks can expect to continue at right back ahead of veteran Pablo Zabaleta.

On the opposite side of the defence, England international Aaron Cresswell has been in excellent form over the past couple of weeks. Because of that, he will surely get the nod over Arthur Masuaku.

Issa Diop and Angelo Ogbonna appeared to have separated themselves as Pellegrini’s first choice centre back partnership, and they will likely beat out Fabian Balbuena once again here.

In central midfield, Declan Rice and Mark Noble are similarly well-established and can expect to start once again on Saturday. Andriy Yarmolenko is the main man at the moment and so he will surely get the nod on the right hand side of midfield.

On the opposite flank, Felipe Anderson is a near sure-fire starter, having established himself as a Pellegrini favourite. And, as mentioned, Lanzini will likely replace Fornals in the number 10 position.

Up front, meanwhile, there’s little point in a debate. Club record signing Sebastien Haller will almost definitely lead the line once again against the Eagles. 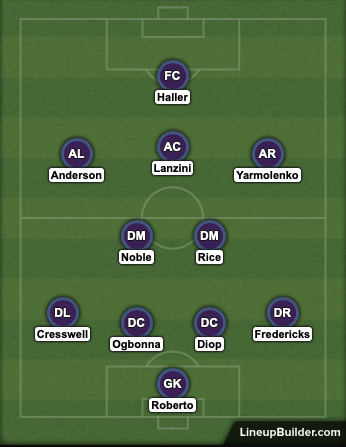