West Ham United midfielder Declan Rice is one of the brightest talents in the Premier League at this moment in time.

The 20-year-old has been nothing short of incredible for the Hammers since breaking onto the scene and has been rewarded by Gareth Southgate with a regular spot in the England side.

Rice continued his run in the Three Lions’ squad against the Czech Republic in the recent international break, sitting alongside Liverpool man Jordan Henderson in the disappointing 2-1 defeat in the European Championship qualifier.

The West Ham star missed the 6-0 win against Bulgaria only days after that defeat through illness, and Football.London journalist Sam Inkersole has claimed that should Rice miss out against Everton, both Carlos Sanchez and Jack Wilshere are in line to replace him.

That would see the Hammers considerably weakened for the trip to Goodison Park, with both of Rice’s potential replacements not on the same level in holding midfield as the youngster.

The partnership between Rice and Mark Noble has blossomed perfectly under Manuel Pellegrini, and West Ham fans will surely be crossing their fingers over the fitness of their star man.

Colombian international, Sanchez, has struggled for minutes in the heart of the Hammers’ side and has only featured for 14 minutes so far this season.

When you compare the South American’s stats from last season compared to Rice in this campaign via WhoScored, it is clear to see how the 20-year-old is a step above Sanchez. 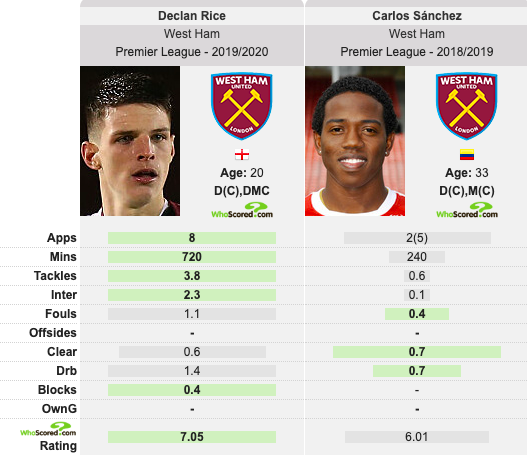 Rice has been phenomenal defensively in the Premier League, averaging 3.8 tackles and 2.3 interceptions per game so far this season, way more than double the amount Sanchez managed in his seven appearances.

The 33-year-old didn’t cover himself in glory in his limited opportunities, with the England international having a considerably better average match rating.

West Ham fans will surely be crossing their fingers over the fitness of Rice after the claim that Sanchez could replace him at Goodison Park – something that would considerably weaken their team.