West Ham are building a real reputation for trusting in youth at the moment, and it’s great to see. With Declan Rice flying in the first team, and with the likes of Nathan Holland, Conor Coventry, and Xande Silva all circling around the senior picture, there is a good strong core of exciting young talents all staking a claim in east London. And now the Hammers can add Ademipo Odubeko to that list. The young striker signed a deal with the West Ham on Friday after spending his schoolboy years with Manchester United, and it’s fair to say that there is a whole lot of excitement surrounding his arrival. The starlet turned 17 on Monday, but has already developed a reputation as a prolific marksman, and hit 35 goals last term, as per the Hammers’ official announcement. Odubeko is also capped for the Republic of Ireland’s youth setup, and all the signs are that he has a massive future ahead of him. Obviously, he needs to keep his head down and keep grafting, but he’s had the best possible start to his fledgling career, and he is moving a club that will hopefully allow him to continue his growth. This is very promising for the Irons. 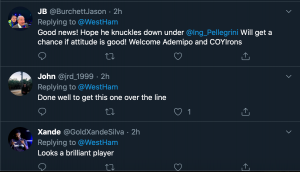