West Ham United manager Manuel Pellegrini would be wise to drop the axe on two Hammers stars against Everton on Saturday.

The east London outfit have made a largely positive start to the season, while it’s been quite the opposite for the Toffees, but even so two changes are needed.

Left back Aaron Cresswell and playmaker Manuel Lanzini should drop out from the team that fell to Crystal Palace last time out, with Arthur Masuaku and Jack Wilshere coming in to replace them.

Those must be the only alterations the Chilean makes to the side that was beaten by Palace, and could be enough to see them smash Marco Silva’s side.

Lukasz Fabianski has undergone surgery and is expected to be out for a few months, which means that Roberto must keep his place between the sticks. Meanwhile, Ryan Fredericks is the main man at right back and must start once again here.

On the opposite side of the defence, Masuaku needs to come in for Cresswell. Yes, the England international is in good form from a goalscoring point of view, but the 25-year-old has actually been the better defender this season.

At the heart of the defence, Issa Diop and Angelo Ogbonna are Pellegrini’s undisputed number one partnership, and will expect to keep their places at Goodison.

In central midfield, it’s not even a question. Declan Rice and Mark Noble are streets ahead of their midfield competition at the London Stadium, and must keep their places on Saturday.

Andriy Yarmolenko is in fabulous form and has to start against the Toffees, while Felipe Anderson should get the nod on the left flank. At the number 10 position, though, a change is needed. Lanzini has unperformed this term and Wilshere should be given a chance in his place.

Up front, it’s pretty simple, Sebastien Haller absolutely must lead the line once again on Merseyside. 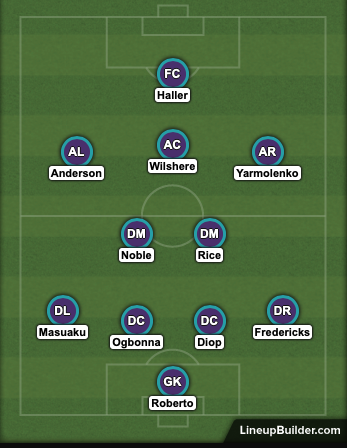