West Ham United manager Manuel Pellegrini would be wise to work on the match sharpness of two of his players against Crystal Palace on Saturday.

While no game in the Premier League is a gimme, the Chilean still needs to work certain players until they reach their top level. With that said, Jack Wilshere should come in for Mark Noble in central midfield, while Pablo Fornals should survive at the number 10 position.

Those two changes would likely be enough for Pellegrini’s team to outclass the Eagles, even if playmaker Manuel Lanzini may feel unfortunate to miss out.

As mentioned, Fabianski is set to miss around two months of action after picking up an injury against Bournemouth last time out. With that in mind, summer signing Roberto will be the main man for the Irons moving forward.

Aaron Cresswell has returned to form in a big way and so he must continue at left back, while Ryan Fredericks has to keep his place on the opposite side of the defence.

There’s no doubt at this point that West Ham are better when Issa Diop partners Angelo Ogbonna at centre back. Because of that, those two men must keep their places ahead of Fabian Balbuena.

Noble would be unlucky to miss out and, while Football Insider reported on Thursday that Wilshere is in a race against time to be fit for Saturday, in the long-term the juice will be worth the squeeze by getting the England international back to top form. With that said, he should partner Declan Rice in the middle of the park.

In the attacking midfield positions, things must remain the same. Fornals is in a similar boat to Wilshere, where you need to keep playing him for him to get up to speed after joining this summer. He should partner Andriy Yarmolenko and Felipe Anderson in support of Sebastien Haller up front. 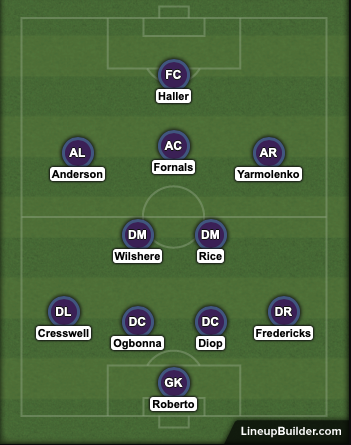