Snodgrass should be given the boot in January

It certainly seems that, having gotten rid of plenty of deadwood over the course of the summer transfer window, West Ham United manager Manuel Pellegrini is happy with his current squad.

The Chilean let the likes of Samir Nasri, Andy Carroll, Lucas Perez and Javier Hernandez depart for pastures new, but has emerged with a quality squad that can compete with almost anyone in the Premier League.

It’s no surprise, then, that little to no changes are expected to occur in the winter transfer window in January. Reliable Hammers news source Claret & Hugh reported on Tuesday that, barring any major injuries, Pellegrini is set to keep his current group together beyond January.

One player mentioned by name was veteran midfielder Robert Snodgrass. The Irons boss is thought to be a fan of the 32-year-old, and is poised to keep him around, despite suggestions to the contrary.

However, that stance surely makes no sense. Time is running out to recoup some money for a player who is declining fast. We’ve seen as much this season.

As per Transfermarkt, Snodgrass’ current market value is £6.2million. However, it’s doubtful that anyone would pay that amount – certainly not for much longer. If Pellegrini wants to get some cash for the Scotland international, he would be wise to give him the boot come the new year.

There’s no arguing with the fact that Snodgrass is on the downslide. That’s natural at his age, but the statistics show that he’s performing far worse this campaign than he did last time out.

As per WhoScored.com, the former Hull City man is down in a host of offensive statistical categories. He’s yet to score or grab an assist this term, while his shots and key passes per game are down from last season. His average WhoScored rating per outing is also worse, down from 6.78 to 6.38.

With all that said, the time is approaching for Pellegrini to get rid of the veteran. He needs to get some money for him while he can, while his exit could be the catalyst for young starlet Nathan Holland to make a proper first team breakthrough. 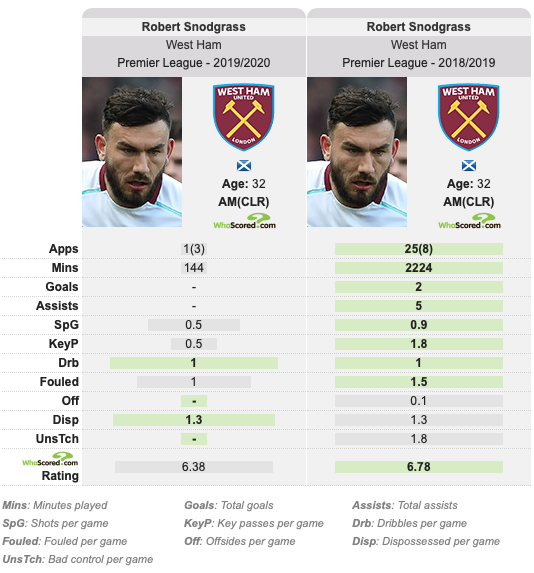