Snodgrass could be in trouble

You will struggle to find anybody associated with West Ham who isn’t delighted by the progress the club has made under Manuel Pellegrini.

The Hammers have gone from mid-table also-rans to genuine European football contenders, and have managed to bring in some serious top tier talent in the process.

The likes of Sebastien Haller and Andriy Yarmolenko have been fantastic this season, and have made the Irons look like a much brighter prospect under the Chilean’s tutelage.

But if there is one person who will be slightly less thrilled by the growth made by the side, it will be Robert Snodgrass.

The Scottish international only signed a new deal over the summer, as per the Hammers’ own website, but he has already find himself on the periphery so far this term.

The 32-year-old has made just one start in the league so far this term, and at this rate, it’s hard to see how he can regain a regular spot in the starting lineup.

A quick comparison between Snodgrass and Yarmolenko, for instance, shows that the Ukrainian has averaged more shots, more key passes, been dispossessed fewer times, and has a higher Whoscored rating per game, as per Whoscored themselves. 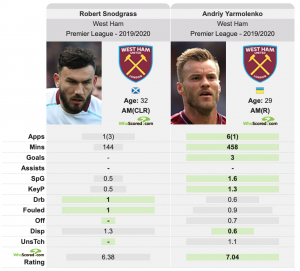 And Snodgrass’ plight is made even more obvious by Sam Inkersole’s summation of his situation.

Writing in a piece for Football.London, he said: “The Scotsman has drastically slipped down the pecking order at the club and has been nowhere near as effective this season as he was last.

“The decision to hand him a new contract in the summer is looking a bit of a strange one.”

At his age, with so many players ahead of him in the pecking order, it’s hard to see how Snodgrass can force his way back into Pellegrini’s plans, and if that is the case, then his career in east London could be in trouble.