Scully has been unlucky

West Ham youngster Anthony Scully has been “very unlucky” with injuries in the recent past, but is performing well so far this season, according to reliable source ExWHUemployee.

The forward has been in fine form for the U23s so far this term, hitting his tenth goal of the campaign in the 4-0 win over Stoker’s City on Monday evening, and Ex has been quick to sing his praises.

Writing on his personal Twitter account, he said: “Been very unlucky with injuries but seems to have had a good season so far.” 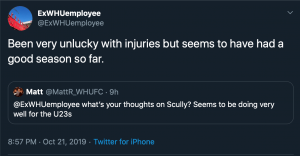 It’s hard top argue with the stats really, and Scully’s 10 goals this season have really made him one to watch for the Hammers. At just 20, he has plenty of time to grow and develop further, of course, but he is a real prospect with a finisher’s instinct that cannot be taught. His contributions have not gone unnoticed either, with the Irish youth international picking up the Premier League 2’s Player of the Month for October, as per the Hammers’ official website. His first team breakthrough could still be some way off, but with the Irons looking decidedly short of cover in advanced areas, and with his form spiking recently, Scully could yet see himself accelerated to a more prominent role.